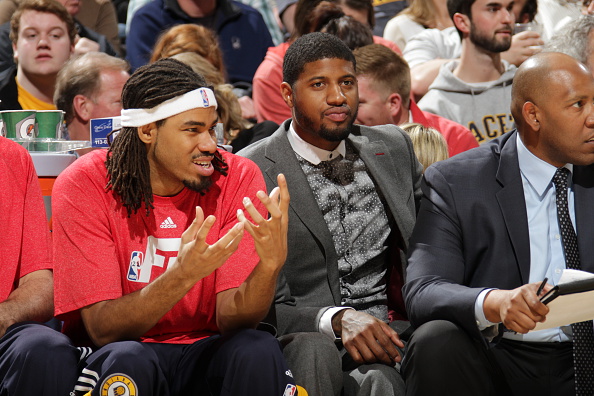 Larry Bird isn’t ready to throw in the towel on the season. Speaking to reporters in Indiana on Tuesday, for the first time in more than five months, Bird talked about Paul George and whether he might be able to make it back to the court at some point this season. Here’s what he said, via the Indianapolis Star:

“I’m always in a win-now mode. I want to win and that’s been my goal, to try to get into the playoffs,” Bird said. “Hopefully, down the road, we’ll see where Paul’s at. We still have no idea whether he’s coming back or not, but it seems like every week he’s getting better and better. If we do have an opportunity to get into the playoffs and he can get some games under his belt and (then) get ready to go next year (then we could play him).”

Bird’s statement marked the first time a Pacer official has acknowledged that George, if healthy, could possibly return this season. George will meet with the media Thursday.

“I always say if the player is ready to play, he’s got to play,” Bird said. “We’re not going to hold (George) back if he’s able to go out there and play. I think it’s important because when you’re out like that, you lose something. He’s going to get beat up, he’s going to get knocked around, he’s not going to look good but I still think it’s important, if he’s able to play, he should be out there.”

George seemed pleased with Bird’s statement, tweeting this later in the day.

Right now the Pacers are 17-32, which, somehow, means they’re just 5.5 games back of the Charlotte Hornets and Miami Heat, who are tied for the Eastern Conference’s eighth seed (only in the East could a 17-32 team be in the playoff hunt). It seems improbable that George makes it back, and that the Pacers hang around for him to want to come back. But the team is still playing hard and the bottom of the conference absolutely stinks. Come March, the temptation for Bird and George might be there.