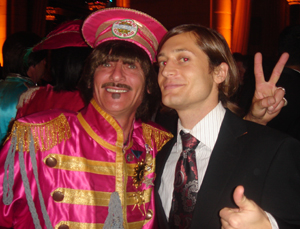 The other side of the SLAM universe, the one you don’t usually read about in The Links or on the website, was out partying last night. Doing it really really really BIG. I don’t know why I’m making this sound so sinister. A contingent of Creative Director Melissa, Managing Editor Susan, our new Photo Editor Monique, hot headed Art Director Stephen, the King of Ads Andrew, the mysterious boss of the bosses, and myself, attended a special crosspromoting Nike/Footlocker event at Cipriani’s across from Grand Central Station, where there was a silent auctioning of all kinds of sports memorabilia. Celebrities were in the building, and let me just get into the celebrity culture thing for a quick second.

Last night there were moments where I felt like I was at the zoo. People stare and point, snap photos, and beg for autographs. It’s a little bit de-humanizing. When you see people fawning all over a complete stranger and acting like they know them, it’s got to create a weird lifestyle of distrust for that person being worshipped. Then again, they’re getting money. Oh, and I posed for a photo with Darryl Strawberry. Hypocrite!

That’s me on the left, Andrew on the right. What, you thought I wouldn’t wear purple? Killa! Sorry, I don’t know why I wrote that. Some of the photos will appear right here on the page, the rest you’ll have to click on. This thing is getting really annoying to create.

The celebwatch goes like this: Darryl Dawkins a.k.a. Chocolate Thunder with a nice understated look.

Howard Cross, an old Giants Tight End, pictured here with Susan. Sorry about the lighting. We did that to make it more artistic. Yeah, that’s right.

Not only was Susan posing with NFL players, she actually bid on an item and won! Congrats Susan. Everybody else is scared of you.

The real LT, the one who is the greatest defensive player in the history of defense and had a crazy look in his eyes (surprise surprise), was there. He’s so crazy, he’s blurry.

Not pictured: Ray Lewis, Ice-T, his wife Coco who may have had a little plastic surgery, Dhani Jones of the Philadelphia Eagles, and dozens of male and female groupies.

Time to make my money as a gossip columnist. BLIND ITEM: Which recently engaged member of the SLAM family forced me to head out to the dance floor with him, pressured me into convincing two girls to dance with us, left me alone with the girl that was on the same stuff as LT and Darryl Strawberry in their prime, then disappeared and waited for me to help him escape from her boring friend, girl #2? I did force that same anonymous SLAM staffer give girl #2 his business card, so we’ll see if this magical evening comes back to haunt us in the future. Your fiancee is a lucky woman. My lady friend of the evening was too busy yelling and screaming and acting out the lyrics to classic Madonna songs to even look at me.

The identity of that SLAM staff member can be found at the other end of this hand that is placed on a waitresses shoulder.

The food was good, which is really all that matters. Since there were free drinks, I was Grey Goosing it like Maurice Clarett. Both teams played hard. Special thanks to Melissa for taking all of the photos. We’ll leave you with this final shot.

I don’t know how to set this up other than to say that there was a Beatles cover band in the building that kept changin outfits to reflect different periods in Beatles history. This is Sgt. Pepper and Stephen. His eyes are really this red all the time.