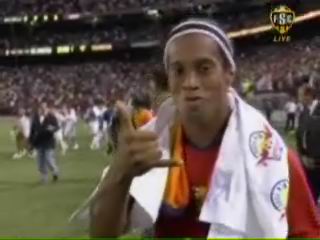 Valencia finally finds their form, which is nice to see because it has been so tough for Los Che of late.

As ‘AS’ wrote on Monday morning , Atletico are like a child who has been caught smoking by their parents and has no more excuses left to give. An apt description. The 2-1 defeat by Espanyol means that the ‘rojiblancos’ have now dropped eleven points at home – a shocking statistic for a side with genuine Champions League aspirations. Fernando Torres said they need to play with more confidence, whilst manager Javier Aguirre said he is becoming increasingly frustrated with their performances which he likens to seeing ‘the same film again and again’.

By the way, when I was talking to Garbajosa and Calderon about La Liga, Garbajosa noted that it’s tough for Atletico to play with width when Maxi and Martin Petrov are injured. I have this convo on tape (in Spanish), and I’ll see if I can drop it in this space next week.

Juande Ramos’s side are second, and with Barça in Japan for some Fifa nonsense, they can go top if they beat Recreativo on Sunday. They’ve collected 31 points in 14 games – a total that would’ve been enough to top the table at this stage in two of the last three seasons – despite already facing Madrid, Barça, Atlético and Valencia. They’ve won every game at home. And they’ve been beaten just three times in total: once at the Calderón when Atlético scored two very late goals to win 2-1 after Sevilla had two men sent off and once at the Camp Nou, when they had a perfectly legal goal disallowed and two of Barça’s three came from dodgy decisions. Only Espanyol – currently flying – have beaten them properly, 2-1 last week.

Also of note: Real Madrid have signed 19 year old Argentinean prodigy, Gonzalo Higuain. If they can’t win a title in the next 2-3 years with Higuain, Robinho and Horseface, they should just donate the excessive funds to charity. Although they could look into restocking the midfield, but maybe that’s just me…

This highlight package is fantastic, and the second Bilbao goal is a dandy.