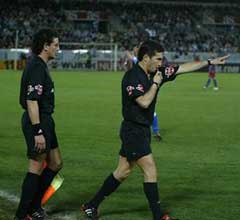 Only three games with results significant enough to get major Youtube play:

Four goals for Ruud Van Nistelrooy. There’s really not much else you can say, except “Fat man soon drink Red Bull.” All-in-White also has some important details on Iker Casillas getting hit in the head by a cigarette lighter.

This was a belter of a match. Ronaldinho‘s free kick is one for the ages. There was a ton of controversy as Sid Lowe explains:

But then Rafa is, as one columnist put it, the Rafa-iest Rafa of all Rafas, the Phantom of the Opera, Brutus stabbing Caesar with a whistle, Spain’s favourite figure of fun. Because there’s nothing like a bit of controversy – and controversy and Rafa Guerrero go back a long, long way.

Really. Read that whole article. Fascinating stuff. And I was wondering about the joke behind the Youtube user “RafaNoMeJodas”, whose videos have actually appeared in this column.

Of course my team gets off the shnide, and I’m not watching it. Lovely.

According to La Liga Loca, Getafe’s keeper, El Pato, has “more clean sheets than a nun’s bedroom.” ZING. That’s why my fantasy team is awesome.