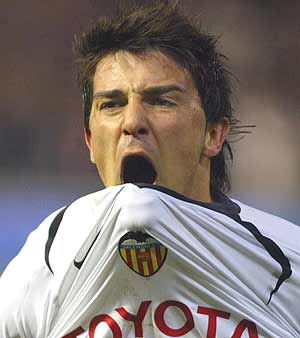 It can be argued that Spain’s La Liga is the top soccer football league in the world. However, most of us don’t get to watch La Liga matches because they aren’t shown on Fox Soccer Channel. I figured it’d be nice to shine some light on Spain’s top flight because the clips from La Liga always appear on Youtube a few days after the fact. It’s the beautiful game in its most beautiful form and it’s just waiting for some exposure. Oh, and if you’re sitting at work, you might want to wait until you get home to watch these. We wouldn’t want you to get fired…

Many of you remember Maxi Rodgriguez for the incredible volley he scored for Argentina against Mexico in this summer’s World Cup. Last Saturday, with Sevilla down to nine men, Maxi scored twice in the final 5 minutes of regulation to lift Atletico to victory. Listen to that “delirious” Vicente Calderon. Music to my ears.

“In fact, it was a real belter of a match, the classic game of two halves and they were both right: Valencia proved that Barça can be rattled, Barça proved that they play the best football in La Liga, and both teams proved that they’re favourites for the title.”

The rest of the column deals with the return of Javier Saviola to the pitch at the Nou Camp. It seems that my main man Sid has become a wee bit clairvoyant. Saviola will be seeing more action because of the Eto’o injury.

Bonus Champions League highlights involving teams from La Liga. (All of these clips are in English.)

Ukraine’s best were no match for Real. Ruud “Horseface” Van Nistelrooy bags a pair as does Raul.

The genius of Leo Messi saves Barca at the end. This is the game that Samuel Eto’o was injured in, completely ruining my La Liga fantasy team that was built around his supreme goal scoring abilities. Messi’s mullet is still dangerously offensive, but “La Pulga” is an absolute prodigy.

Valencia win on goals from Miguel Angulo and David Villa. Angulo actually means “perfect running volley” in Spanish. David Villa (the screaming guy you’re looking at) is a goal scoring machine. In honor of basketball players calling themselves the truth, he shall be henceforth known as “la verdad.”

Coming up this weekend:

Real Madrid – Atletico Madrid: The derby between the “whites” and “indians” should be fascinating this year. Atleti have restocked on high quality talent and are looking to break their poor luck against their crosstown rivals.

Sevilla – Getafe: The UEFA cup holders look to rebound from their first loss in 12 matches.