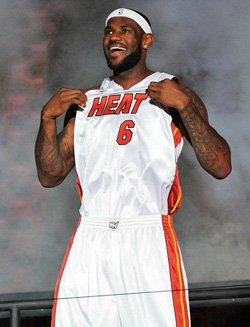 Amidst the hysteria and celebration last night, LeBron James, Dwyane Wade and Chris Bosh made their reign over the city of Miami official by signing six-year contracts.

According to ESPN, Bosh and James will earn $110 million, while DWade will earn $107 million, with each of them taking roughly $15 million less than the max.

Each player took $15 million less over the life of the contract to sign with Miami, but the deals came with a caveat.I t was a party in South Beach on Friday night as Chris Bosh, Dwyane Wade and LeBron James donned Miami Heat jerseys at a welcoming celebration.

All three contracts, sources told ESPN.com’s Marc Stein, have an early termination option after the fourth season that would allow LeBron, Bosh and Wade to return to free agency in the summer of 2014. Each player also possesses a player option entering the final season of the contract (2015-16).

Other than the three second round rookies the Heat selected this June, the rest of the roster is looking scarce. Not that it won’t or can’t fill out quickly. Mike Miller and Mario Chalmers are more than serviceable pieces who could potentially start. Udonis Haslem will likely be re-signed.

Jason Williams, Raja Bell and Zydrunas Ilgauskas are all possible veteran adds the Heat can make for minimal money.