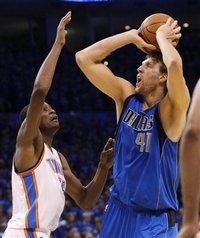 As the NBA Finals draw ever closer, it’s normal for everyone to start looking at historical angles, and where players’ legacies stand.

LeBron James — who already dealt with his own controversial brush with NBA history last week — says Dirk Nowitzki has one of the most unguardable offensive repertoires that the League has ever seen.

According to LBJ, only Kareem Abdul-Jabbar’s sky hook ranks ahead of Dirk’s insane one-legged fallaway jumper, in terms of difficulty to stop.

“He is going to make shots. You have to try and make him work on every catch and go from there,” Heat forward LeBron James said. Nowitzki has been creating an impressive highlights reel thus far in the playoffs with his variety of moves, and is averaging 28.4 points per game and shooting .517 percent from the field. “He is throwing everything at guys. He is doing every move in the book,” Heat forward Chris Bosh said. “We are all going to have to take up the challenge and try and guard him.”

Nowitzki’s now famous fading jumper on one leg that helped the Mavs beat the Thunder impressed the Heat. “That is something new. He has always made some awkward shots for a big guy, but that one-legged shot that is pretty much unguardable,” said Heat forward Udonis Haslem, who had success guarding Nowitzki in 2006 when the Heat beat the Mavericks to win the title. “Probably the most unstoppable shot ever is the sky hook. I guess you put Dirk second,” James said. “You have a seven-footer fading away off one leg. There is no one that can block that shot.”

The Miami Heat are going to throw a number of looks at Dirk Nowitzki in the title round, with Chris Bosh and Udonis Haslem expected to bear the brunt of the responsibility starting tomorrow night.

Despite limited exposure in the past, LeBron James will also likely get opportunities to slow the big German forward during the series. He’ll receive an up-close and personal look at Dirk’s shot that he admires so much.