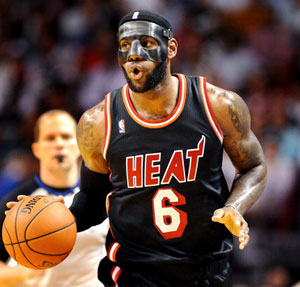 The NBA has requested that LeBron James change his black mask to a clearer model for the Heat’s game against the Magic on Saturday. LeBron appealed the NBA’s decision, but to no avail, and will have to choose from a series of League-approved options, per ESPN.

LeBron James will comply with the NBA’s request to ditch his black mask for a clearer version to protect his broken nose for the Miami Heat’s game Saturday against the Orlando Magic.

Heat coach Erik Spoelstra said Saturday morning that the team has been in contact with the NBA and that James will select from a variety of league-approved masks to wear for the next several weeks. Spoelstra would not indicate the specific style or color of the new masks James will consider.

“We’ve had numerous ones made, so he will have his pick and will choose one that is authorized also by the league,” Spoelstra told ESPN.com after the Heat’s shootaround. “We did talk to the league (Friday). So stay tuned for what mask you’ll see tonight.”