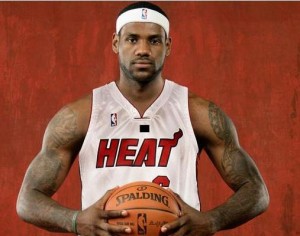 For the second time in his career, LeBron James is changing his business representative, and turning over more of his off-the-court initiatives to his closest friends.

The news broke that LeBron is moving on from the powerful Creative Artists Agency (where he was represented by agents Leon Rose and William “Worldwide Wes” Wesley), and taking his talents over to longtime buddy Rich Paul.

Paul has worked at CAA for a number of years, but is now creating his own agency (Klutch Sports Management) and has landed James as his first big-time client.

James signed with Rose in 2005, with Rose then joining CAA in 2007. The CAA link was cited among the factors that brought the three stars together during 2010 free agency, when James left the Cleveland Cavaliers and Bosh left the Toronto Raptors to join Wade with the Heat. James already had a working relationship with Paul under the umbrella of their LRMR Marketing company, a collaboration that also includes James’ manager Maverick Carter and friend Randy Mims, who has emerged as a member of the Heat’s traveling party. Through that association, James branched into an international marketing deal with the Fenway Sports Group, leading to his stake in Premier League soccer power Liverpool FC.

While agency switches are not uncommon, with James having previously left the representation of agent Aaron Goodwin, they generally tend to have the greatest impact with the expiration of contracts. While James is under contract to the Heat through 2015-16, he has an early-termination option in his contract for the 2014 offseason and a player opt-out clause for the 2015 offseason. A new agency only would collect on a new contract. The source close to James said the 2014 opt-out clause was not a consideration in the move and the impending agency switch should not be taken as the precursor to an eventual opt-out by the 2012 NBA Most Valuable Player.

When LeBron James fired his first agent back in 2005, the decision was met with widespread criticism, but James’ business has continued to thrive over the years.

Going forward, it will be interesting to see which players jump ship from the bigger agencies and elect to join LeBron’s crew.