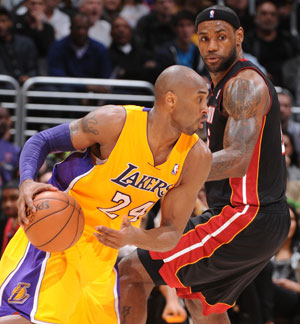 Before Thursday night’s disaster in Boston, Kobe was averaging 7.8 assists over his previous 10 games. Not bad for a guy who shoots more than anyone in the League.

LeBron James was asked if he’s buying it that Kobe Bryant has become a distributor. He said “no” and added more.

It will be interesting to see what role Kobe plays when the Lakers face the Heat tomorrow on national television. He may just drop another double-double—we all know Kobe loves a challenge.