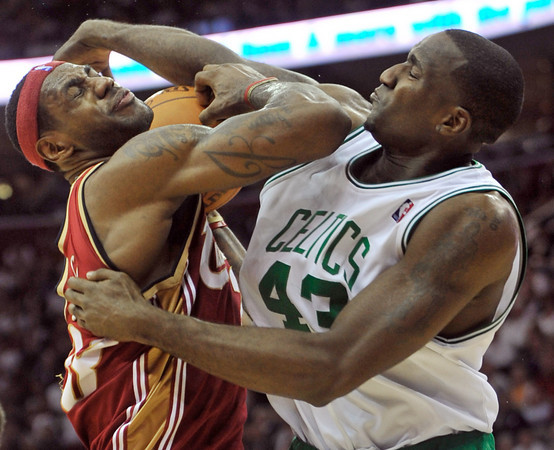 The Cleveland Cavaliers are expected to make the Kendrick Perkins signing official Tuesday, and Perk’s new teammates are excited about the addition.

LeBron James, who has faced Perkins in numerous Playoff wars over the years, says the veteran big man can only help the Cavs in the NBA title quest.

Perkins was traded by the OKC Thunder after four-and-a-half seasons late last week, and subsequently bought out by the Utah Jazz.

“He brings a championship DNA, a guy who has been there and knows what it takes to win it all,” James said. “He brings toughness to our interior and a great locker room guy. All he cares about is winning. That’s very important to our chemistry and very important to what we’re building here. We’re happy to have him.”

Both James and Kevin Love said Perkins is a player guys love to have as a teammate, but dread facing. […] “You love having him on your team, you hate playing against him. He’s definitely one of those guys,” Love said. “He brings a different edge with his mentality to the team. He’s a guy who instantly fits because of that mentality.”

Both James and Perkins were part of the legendary 2003 draft class. Perkins, selected 27th overall, becomes the seventh member of that class to play with James, joining a list that includes Chris Bosh, Dwyane Wade and Sasha Pavlovic along with second rounders Jason Kapono, James Jones and Mo Williams. […] “We had a great class in that draft,” James said. “We want to go down as one of the greatest NBA drafts ever. It’s pretty cool to be able to team up with guys who have been in your draft. I’ve been blessed to team up with quite a few.”