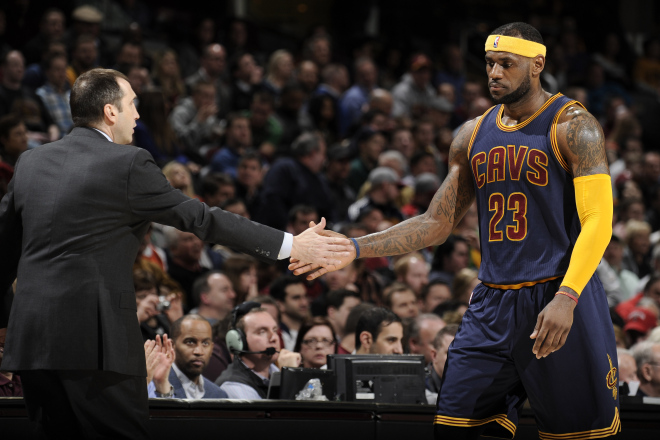 Last season, LeBron James averaged a career-low 36.1 minutes per night, and the plan in 2015-16 is to bring that number even lower.

LeBron, reluctantly, says he’s on board with Cleveland Cavaliers head coach David Blatt’s plan to reduce the wear and tear on his superstar’s body.

James, turning 31 in December, has appeared in five consecutive NBA Finals and knows that he needs to pace himself throughout the endless regular season slog.

“I think that’s a coach Blatt, myself conversation,” James said Monday when asked about his minutes. “We haven’t quite gotten there yet. I’m very hard headed, I am, because I love to play so much. But I think (with) what we have, I don’t need to be as hard headed. I think I’ll be very smart with how many minutes I play per game and what I’m doing on the floor.

“I think we have enough pieces to (reduce James’ minutes),” James continued. “And I think Kevin Love will allow me to sit a lot this year just because of his ability, what he’s able to do. Kyrie (Irving) as well. So I won’t have to worry about playing big minutes this year.”

In mid-November, James was averaging 39.1 minutes per game and said “that has to come down.” He challenged Cleveland’s decision makers – Blatt – to “be smart about it.” […] James also admitted Monday what Blatt alluded to for months, that the game’s best player can be “hard headed.” Finally, James is clearly pleased with the Cavs’ depth, singling out Love, with whom he had an awkward, tenuous relationship in their first season together.