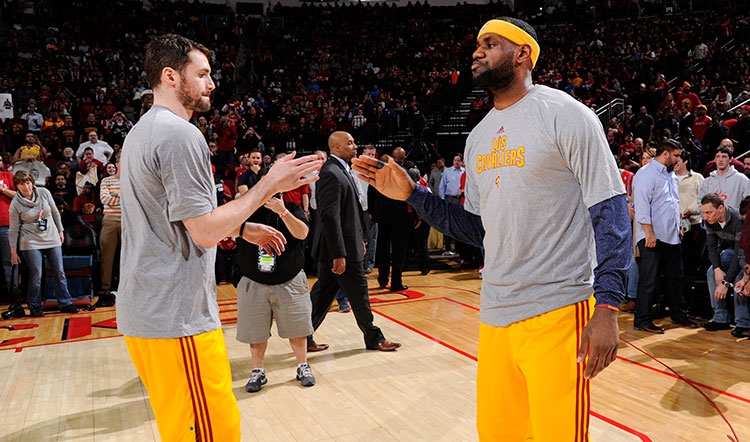 The Cleveland Cavaliers have to move on without an injured Kevin Love for the remainder of their postseason saga, and LeBron James acknowledges that it will be a monumental challenge.

Love put up 14.3 points and 7.0 rebounds against the Boston Celtics in the first round of the Playoffs, before he was knocked out by a devastating left shoulder injury.

James is now expected to take up residence in the post as Love’s fill-in, something he did in Miami for the Heat when Chris Bosh went down in Game 1 of the 2012 Eastern Conference Semifinals against the Indiana Pacers.

“We all have to pick our own game up,” James said Tuesday. “We can’t fill Kevin’s shoes, you can’t do that. He’s special for a reason.”

When Bosh went down in in Game 1 that season against the Indiana Pacers, James slid into the post, the Heat played many offensive possessions without traditional structure, and James and Dwyane Wade pushed the Heat past Indiana in six games. […] James averaged 30 points, 10.8 rebounds, and 6.2 assists in that series, shooting 51.7 percent from the field.

Bosh returned late in the Eastern Conference Finals, and the Heat went on to win the first of two titles. […] “Every situation is different,” James said, when asked about that 2012 series against the Pacers. “That postseason is so far behind me, but I would have to watch those games and see how we were able to go about our game plan, see how we worked with out CB, and CB was obviously just as important as Kevin, so, I’ll have to go back and re-watch it.”