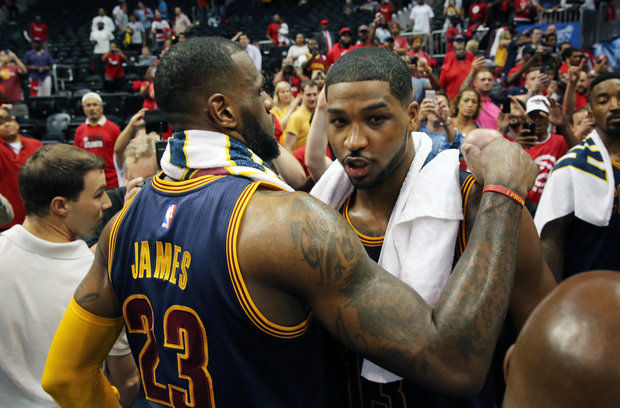 Cleveland Cavaliers big man Tristan Thompson is headed for restricted free agency this summer, and LeBron James has begun to pressure the Cavs to ink Thompson to a long-term deal.

Thompson turned down a reported four-year, $52 million extension prior to the Oct. 31 deadline for guys on their rookie deals.

According to LeBron, who shares the same agent as his teammate, Tristan should be in Wine and Gold for the remainder of his career.

“Tristan should probably be a Cavalier for his whole career,” James said on Monday after practice. “There’s no reason why he shouldn’t. This guy is 24 years old. He’s played in 340‑plus straight games, and he’s gotten better every single season. It’s almost like, ‘What more can you ask out of a guy?'”

Ever since stepping into the starting lineup following Kevin Love’s season-ending shoulder surgery, Thompson has been the most consistent Cavalier. With Kyrie Irving battling injuries, Thompson’s work ethic and his persistence on the glass has instilled a jolt of vigor into a team that was in desperate need of it. […] The extra possessions he’s accustomed to wrestling down were key in Sunday’s Game 3 over Atlanta. His work on the boards led to a James 3-pointer that put the team on top for good in overtime. Including the postseason, Thompson has played in 301 consecutive games, second to only DeAndre Jordan of the Los Angeles Clippers (322).

“I appreciate the compliment, if that’s a compliment, from LeBron,” Thompson said. “But I’m just here to work. Just coming to work, do what the team asks from me, whether it’s on the court, off the court, in the community, and just be a professional.” […] The NBA’s new $24 billion television deal could radically increase the salary cap from about $67 million next season to approximately $90 million for the 2016-17 season. The Cavaliers will be forced to fork out more than their October offer to retain Thompson.