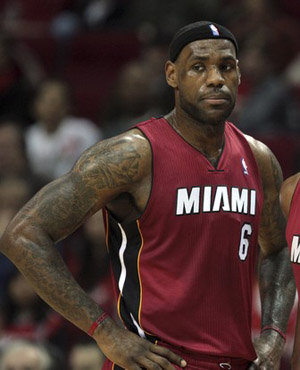 As we approach the halfway point in the ’10-11 season, this much is obvious: There’s no clear-cut MVP just yet. And, from the looks of it, we won’t be having a repeat winner, either. As LeBron himself recently admitted, when he joined his buddies his Miami, the probability that he’d win the coveted award in 2011 all but disintegrated.

James has already paid a huge public relations toll since “The Decision,” but he noted on Saturday that he understands that he compromised his ability to take home hardware as well.

The Sun-Sentinel reports that James acknowledged that both he and teammate Dwyane Wade will not win the NBA MVP award this season. “When we decided to come together, our MVP chances went out the window,” James told reporters.”

For what it’s worth, he’s right, and—regardless of whether or not you feel he does or potentially could deserve it—the idea of a player with two elite teammates being voted MVP is pretty unrealistic. If nothing else, it’s good to see LBJ actually understands how the process works, given his recent PR missteps.

“As long as we keep winning, I know I’m up there with the people that’s in the race for it. I want to be it, so why not?”

Rose racked 19 points, 9 assists and 4 rebounds in the win and was showered with chants of “MVP, MVP” late in the game.

“I love it,” he said of the chants. “Like I say, there’s no point in playing this game if you’re not trying to be the best. And this year I want to be MVP.”

As far as his teammates are concerned, Rose is as good as anyone in the league.

“I don’t see why he couldn’t [be MVP],” Bulls forward Carlos Boozer said. “He carries our team every night. He makes plays, he scores the ball, rebounds the ball. I think he might be the only guy in the league averaging over 24 [points] and eight assists or whatever. He’s special.”

And this week we learned the SLAM readers agree.