LeBron James Went Back to His ‘Cleveland Days’ in Game 5 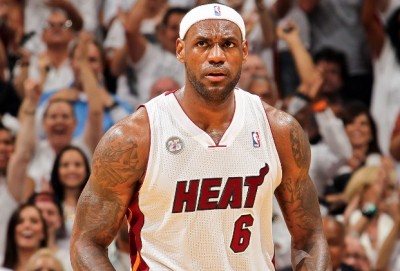 With Chris Bosh (7 points) and Dwyane Wade (10 points) nowhere to be found, and the Miami Heat in danger of falling down a 3-2 hole in the Eastern Conference Finals, LeBron James realized he had to go back to his old, Cleveland Cavaliers ways.

James did it all for the Heat in the second half of Game 5 against the Indiana Pacers, scoring 16 of his game-high 30 points in the third quarter, and putting the game — and perhaps, the entire series — out of reach.

LeBron talked about the necessity he felt to completely take over, ensuring a crucial 90-79 victory.

“That’s LeBron showing his greatness and making it look easy,” Heat coach Erik Spoelstra said. “His engine in that third quarter was incredible. He was tireless. He was making plays on both ends of the court, covering so much ground defensively, rebounding, making virtually every play for us offensively. It’s really remarkable and a testament to his conditioning and obviously his greatness, his ability to make big plays when you need it.”

Said James: “I just kind of went back to my Cleveland days at that point and just said, ‘Hey, let’s try to make more plays and be more of a scoring threat as well,’ and just see if the guys would follow me, and just lead them the best I could.”

It wasn’t entirely a one-man show for the Miami Heat, though it certainly felt that way. After James and Juwan Howard screamed at their teammates during the halftime break, Udonis Haslem was huge in the second half, hitting numerous open jumpers and finishing with 16 points (having gone 8-of-9 from the field.)

The series now shifts back to Indiana for Game 6, and James may need to pull off yet another super-human effort to thrust these Heat back into the NBA Finals, where — speaking of “Cleveland days” — the San Antonio Spurs await.