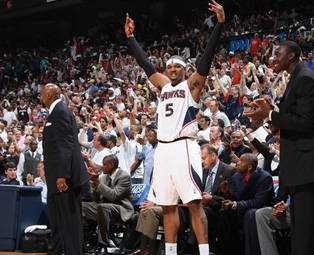 For the last five years, the Hawks have been rebuilding a franchise that was for many years fatally flawed.

For a while in the mid ’90s, I turned my back on the Hawks. I’d been a Hawks fan since birth. I was even a season ticket holder back when I was 14 years old. (And I don’t mean my Dad had season tickets and took me to all the games. I actually saved my money for an entire summer and bought a $5 season ticket in the worst seats in The Omni. My friends Todd and Dave did the same, and after school we’d take a bus to the subway then ride down to the games.) I stopped going to games when I made the basketball team in high school and started having practices and games every day after practice. Ironically, it was making the junior varsity and then varsity basketball team that lead to my demise as a Hawks fan. Our coach asked me to play point guard, to study the position, to learn how to run a team. For whatever reason, I fell in love with the way Kevin Johnson played basketball. He wasn’t overtly athletic (well, except for one time when Hakeem got in his way), but he was crafty, smart, solid. I wore a number 7 practice jersey and watched every Suns game I could find on TV. The Hawks were good, but I knew they weren’t going to win a title, not as long as Lenny Wilkens was the coach. So I cheered for the Suns, and they almost pulled a title off (that Jordan guy got in the way).

When I moved to New York City, the Hawks were a team stuck in the toilet, swirling around and around like that one turd you can’t get rid of. Behind GM Pete Babcock and coaches Lon Kruger and Terry Stotts, the Hawks hovered around the .400 mark, not developing players for the future, making bad trades, circling, circling, circling in a miserable holding pattern. They were also my link to home, so I continued following them, cheering for them, even more so than I did just before I moved.

It took new ownership and a new GM, Billy Knight, to flush that toilet and rebuild us from the ground up. Say what you will about BK’s prickly nature, but he hired Mike Woodson, traded for Joe Johnson, drafted Josh Smith, traded for Mike Bibby, signed Zaza Pachulia, drafted Al Horford. Billy made mistakes — notably drafting Shelden Williams over Brandon Roy, also not drafting Chris Paul or Deron Williams — but the mistakes he made weren’t financial killers, and when the Hawks were trying to build ballers on a budget, BK’s work really explains how the Hawks were able to get to where we are today. Rebuilding was a slow, painstaking, incremental process. But it was also undeniably successful.

I really didn’t know how the Hawks/Heat Game 7 today was going to turn out, so much so that I sort of worked myself into a psychological frenzy in the 36 hours leading up to the game going over the many possible outcomes. Would the Heat shoot 50-percent-plus on threes like they did in Games 2 and 3? Would we be able to overcome what turned out to be pretty severe injuries to two our starters (Marv and Al)? Would the refs make as many terrible calls in game 7 as they did in Game 6, when Dwyane Wade was allowed to shoot free throws whenever someone breathed upon him? I got so nervous about this last

possibility that I set my alarm for 9:00 a.m. to check NBA.com and see who the refs were going to be. When I saw Joey Crawford and Bennett Salvatore listed, I sat straight up in bed and couldn’t go back to sleep. I just knew we were going to get screwed.

But we didn’t. Strangely, it took until Game 7 for the Hawks to find the form they displayed in their best games this season. They shared the ball, knocked down open looks from outside, played terrific team defense (held Miami to 52 points through 3 quarters, forced 19 turnovers, got out on three pointers and held Miami to 4-19 on threes). Andwe beat Miami 91-78 to win our first Playoff series in a decade.

Joe Johnson finally had a breakout game. He’s been a streaky player throughout his Hawks career, and he hadn’t been very good the first 6 games. When I wrote in our preview that I thought Joe wouldn’t be that much of a drop-off from Dwyane Wade, some of our commenters ridiculed me. Well, today Joe had 27 points on 10-19 FGs, 6-8 threes, and he had 5 steals, 5 boards and 4 assists. Zaza Pachulia played with fire, making up for Al Horford playing on one leg, and Flip Murray and Mo Evans, the two guys we added this offseason, were tremendous as they kind of filled in the blanks between our big three of Joe and Bibby and Josh. In fact, Josh Smith said it perfectly: “We’ve worked for every bit of this. We earned the right to be here.”

I know the season isn’t over, I know that we start Round Two tomorrow night against a mighty Cleveland team, but if the season ends with a four game sweep in Round Two, I’ll be OK with that. We made the Playoffs last year, got zero respect from the national media all season — we finished fourth in our Conference and got zero TNT appearances and zero national ABC appearances — but still went a step further in the postseason this year than last year. This was our goal this season, and we pulled it off. I will watch and probably go to some of the games against Cleveland, but if we can manage to advance any further, it’s just gravy.

There will be time this summer to worry about the Draft, to look at who we’re going to be able to re-sign and who we might add. But for the next day, I just want to revel in our achievement. We still have a ways to go, but for once we seem to have a road map that leads in the right direction. The last few years I’ve watched every game as we’ve put in the work but other teams got all the shine. In a few weeks the NBA Finals will start with two teams that won’t include the Hawks.

But today? Today it was our turn. We worked for every bit of this. We earned the right to be here.

And man does it feel great.