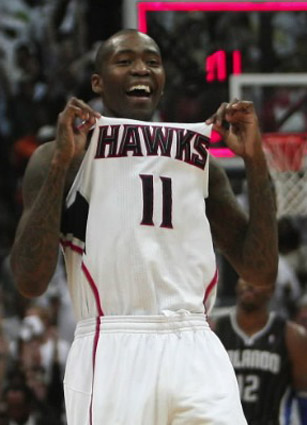 I spent most of the last decade writing and talking about the Atlanta Hawks.  This wasn’t some shrewd career move. If you want people to pay attention to you, you write about things people pay attention to: the Lakers, the Celtics, the NFL, politics, boobs.

I didn’t write about the Hawks because I was looking for attention; I did it because the Hawks are what I know. I grew up in Atlanta, watched Hawks games as a kid, went to Hawks games as a teenager. Even after I moved to New York, I watched every Hawks game I could get my eyes on. This was my team, these were my players.

For most of that last decade, they just weren’t very good. You know the last time the Atlanta Hawks won an NBA championship? Never. They last title they won was when the franchise was based in St. Louis, back in 1958. You know the last time the Atlanta Hawks went to the Eastern Conference Finals? Never. Since I’ve been alive, the Hawks have never been one of those teams with money to throw around. So they competed and tried, and there were years that they played hard, but most of the time they just weren’t good enough. We knew the Hawks weren’t going to win the title before the season even started. The most we could ask for was for the Hawks to exceed our expectations.

Still, for the last decade, I was completely and utterly obsessed with the Hawks. There were times when I was watching important games, sitting on my couch, my heart in my throat, and I was so obsessed that I’d throw things or yell at people. (Probably better than throwing people or yelling at things.) I wrote about the Hawks so often that the Hawks organization eventually hired me, and for three seasons I wrote weekly columns about the team for Hawks.com. I got to call a couple of Hawks games on radio thanks to the great Steve Holman. Due to the relationships I was able to forge with the players and front office, I managed to talk my way getting more access with the team than most journalists will ever get.

Which doesn’t mean I wasn’t watching.

The Hawks made one major change coming into this season, swapping out Mike Woodson for Larry Drew. Drew promised to get more active on offense, less predictable on defense. And perhaps surprisingly, that’s exactly what the Hawks did. What didn’t surprise me was that the Hawks finished the season 44-38, with the fifth seed in the East. Above average. Not terrible. Not great.

That has been the story of the Hawks for the last few years. They got over that hump, survived that 13 win season in 2004-05, survived the lawsuit amongst the owners, even survived the crazy Lon Kruger Playoff promise. And for all of Mike Woodson’s predictability, he dragged the Hawks past horribility (#clydeword) into mediocrity, and then beyond.

Last night, while the Hawks were knocking off the Magic, the Falcons traded four draft picks to move up and draft Julio Jones. Now, whether or not you think this was a smart move by the Falcons — and I happen to think it was, because as an SEC fan I saw a lot of Julio Jones, and Julio Jones is dope — it showed that the Falcons were willing to gamble on themselves. The Hawks have made two big trades the last few years, both of them for aging guards (Hinrich and Bibby). Not exactly rolling the dice. I believe the biggest move the Hawks made in the last year was swapping Woody for Drew. I still don’t know that this was the best way to move beyond mediocrity, but at least it was something.

I didn’t come out and pick the Hawks to win this series, but I believed they had a chance. (I went to lunch two weeks ago with former SLAM EIC Tony Gervino and repeated this claim, so he can attest I am not lying.) On the surface, even giving the Hawks a shot in this series wasn’t a sure thing. Last year in the Playoffs, the Hawks got curb-stomped by Orlando, four games to none — by a combined 101 points, the most lopsided four game sweep in the history of the NBA(!). They lost Game One by something like 334 points, and it was at that exact moment I knew they were done for the 2009-10 season.

I’ll allow that the Magic have probably worsened themselves with the flurry of moves they made since reaching the Finals in 2009. And this season’s trades, especially trading Rashard Lewis for Gilbert Arenas, seemed like they were swinging for the fences. Still, they went 52-30 this season and finished 8 games ahead of Atlanta in the Southeast Division. The Hawks beat them 3-1 in the regular season, but one of those games was before Orlando traded everyone away, and one was without Joe Johnson. Post-trade, the Hawks and Magic split the series, 1-1.

So I really wasn’t sure how this series was going to play out. But give the Hawks some credit: They freaking did it. The Hawks won the series 4-2. Credit goes to several people, but here’s three:

1) Larry Drew: One of Mike Woodson’s peccadilloes was that he believed the best way for the Hawks to defend Dwight Howard was to double-team him when he caught the ball. The Hawks did this in Game 1 of the Playoffs last year against Orlando, and the Magic shredded them. The Hawks refused to adjust, the Magic didn’t have to adjust, and they crushed the Hawks. Larry Drew instead decided to play Dwight straight up with a variety of bench players, and shift Horford to the four and Josh to the three. And it worked.

2) Jason Collins: Twin was out of shape last season, but this year he came in leaner and meaner and the Hawks used him as a foul machine against Dwight Howard.

3) Jamal Crawford: Mr. Creezy came off the bench but was Atlanta’s leading scorer in this series. More than that, he was Atlanta’s spirit, making big plays whenever it seemed they were done.

I don’t know if the Hawks are going to beat Chicago. I don’t expect them to, but then again, maybe it’s better to manage my expectations. Because with these Hawks, you really never know.

And right when you count them out, they pull you back in…