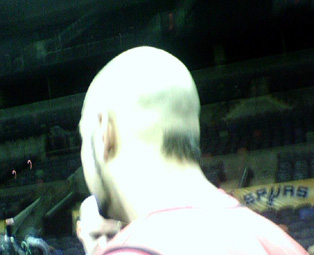 Drew Gooden’s ducktail haircut has spawned millions of blog posts this season. It became a trademark of sorts…a very weird, strange trademark. Drew arrived at training camp this season with the haircut — basically a lone, insolent patch of hair on his neck — and rode it out all season long. It was an homage, he said, to the ’80s, a popular haircut in the Bay Area back in the day.

(One of my favorite moments at the Finals this year came before one of the games when I was talking to Tony Parker and he asked me about Drew’s hair. I explained that it was some sort of homage to the ’80s, and Tony said, “But this is 2007.” Oui, Tony.)

Anyway, I have it on very good authority that the ducktail is now gone, dead, deceased. I heard about it earlier today and then I confirmed it with the man himself. Cavs fans, begin your crying.