Links: How I Voted… 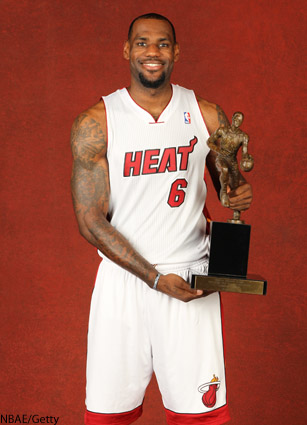 Hey everyone. My name is Lang, and I used to hang out around these here parts pretty regularly. That ended about a year ago, when I left SLAM’s full-time employ to become SLAM’s Editor at Large. What does this mean? Nobody knows! I still pop by the office from time to time though, and SLAMonline is still my browser’s homepage. But now I have time to do some things. I can, for instance, take walks during the day, and I can work on projects that take months instead of hours. And, best of all, I have time to watch even more basketball than I ever could.

A few years ago, the NBA asked me to vote in their annual post-season awards. They ask something like 150 media members to vote, so there are a lot of voters out there, but this was a big deal for SLAM. Historically, SLAM had always been a bit of an outsider, and it took us a while to kinda get a foot inside the door of the establishment. Maybe this was a good thing, maybe it wasn’t, but it did give us some legitimacy and recognition. Every year I’ve done this, I’ve posted my ballot here on SLAMonline, to be transparent and let you guys know how I voted, and also to give you the chance to call me an idiot if you disagree.

Anyway, here are all the individual categories for which I was asked to vote. I don’t know why I was picked for these categories, I just was. SO! Here’s how I voted:

SIXTH MAN
1. James Harden
2. Lou Williams
3. Al Harrington
Pretty obvious, to me. In the third slot, for me it came down to either Harrington or Jason Terry. Terry’s numbers were down just slightly from what he did last season, while Harrington’s were up, and Denver actually finished with a better record than Dallas, so I went with Al. (And he ended up finishing fourth in the actual balloting behind Terry.)

ROY
1. Kyrie Irving
2. Kenneth Faried
3. Ricky Rubio
I was so vexed by this category and the Most Improved Player category (more on that later) that I called Ben at the SLAM Dome to get his input. (And it turned out that Ben saw things the same way I was seeing them.) Irving was the clear-cut winner to me. But what to do about Ricky Rubio? He came in, earned the starting role and was one of the biggest stories of All-Star Weekend. Kid even got a SLAM cover. Now, obviously, Ricky blew out his knee and missed the last 25 games of the season. Does that disqualify him from consideration? Then again, Rubio did play in 41 games, which is only five less than Faried, who had to work his way into Denver’s rotation. So that left Ricky in at the three slot. The other guy I considered heavily was Isaiah Thomas in Sacto, who played 65 games and worked his way into the starting lineup, but he also got all those minutes on a team that finished 28 games behind San Antonio in the West, and he averaged about half the assists Rubio did while averaging about the same ppg.

DEFENSIVE PLAYER OF THE YEAR
1. Dwight Howard
2. Tyson Chandler
3. Serge Ibaka
Now, obviously I was in the minority here, as Chandler ended up winning this category. When the award was announced, these facts were cited: “The Knicks ranked among the top half of the League in several key defensive categories, including opponent turnovers per game (17.0, second), opponent field-goal percentage (.442, 10th), and opponent scoring (94.7 ppg, 11th). Opposing teams averaged 22.5 more points and shot .520 from the field when Chandler was not in the lineup. Opponents shot .438 with Chandler in the lineup. In addition, Chandler grabbed 22.1 percent of his team’s defensive rebounds when he was on the floor.” Yes, Dwight won this award the last three years in a row, and people talked about fatigue with Dwight winning, although to me that was no reason to discount him this season. And maybe some people were tired of the circus of whether he would or wouldn’t be traded. Fine. But I still thought no player was as important to his team’s defense and had more impact defensively than Dwight Howard. Magic opponents shot .442 when Dwight was on the floor, and he averaged 14.5 rebounds per game to go with 2.1 blocks. (Chandler averaged 9.9 rpg.) I watched more Knicks games this season than I ever had before, and Chandler was fantastic all year, the guy who just came to play every night despite the circus that was the Knicks this season.

COACH OF THE YEAR
1. Gregg Popovich
2. Tom Thibodeau
3. Frank Vogel
Really tough call here. What Thibs and the Bulls did without Derrick Rose all season was remarkable, obviously. But the Spurs finished with the same record as the Bulls (50-16), and Pop managed to consistently rest guys throughout the season. More than that, check this out: The Spurs had 10 guys who averaged at least 20 minutes per game. (And that doesn’t count Tiago Splitter, who averaged 19 mpg.) On the flip side, the Spurs had only one player average over 30 minutes per game, and that was Tony Parker, who averaged just over 32 mpg. He kept all those guys engaged and fresh and playing hard enough to win the Western Conference and still managed to get guys rest (only one guy played all 66 games—Danny Green).

MOST IMPROVED
1. Ryan Anderson
2. Ersan Ilyasvoa
3. Goran Dragic
This was probably the hardest category for me to figure out, because of one guy: Jeremy Lin. Now, one disclaimer: Pretty much everyone in this category, historically, is someone who has seen a jump in minutes from the previous season. That said, Jeremy Lin went from being cut to making two SI covers and a SLAM cover and, for a while there, being the biggest story in sports. I was at that Knicks-Lakers game when he went for 38, and after covering the NBA for SLAM for a dozen years, I can’t say I’ve ever been at a game where something quite like that happened. So he had an undeniable impact on not just the NBA, but on the entire sports world. All that said, do you know how many games Jeremy Lin actually played this season? Thirty-five, which is just over half of a season. And he only started 25 games. So I didn’t include him on my ballot at all, and he ended up finishing fifth.

MVP
1. LeBron James
2. Kevin Durant
3. Kobe Bryant
4. Chris Paul
5. Tony Parker
This is exactly how the final award ended up going, except KB and CP flip-flopped. I went Kobe first only because dude averaged 28 ppg in his 16th season and managed to play in 58 games, and for everyone talking about all the problems with the Lakers all season long, they still won their division and finished third in the Conference.