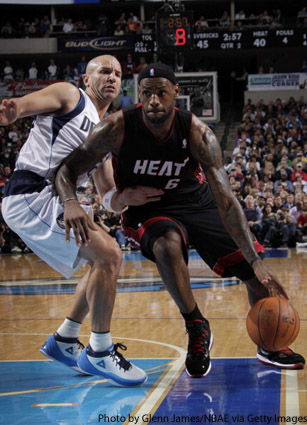 My name is Lang Whitaker, and after announcing my full-time departure from SLAM and taking the last few weeks off from SLAMonline, I’m back on the grind for the NBA Finals.

I’ve been gone from SLAM full-time for a few weeks now, which in internet time is like 8,000 years. In the meantime, I’ve been spending my days working hard at doing mostly nothing. Sure, I’m still recording podcasts with Sekou for NBA.com. I’ve been taking meetings, lunches and dinners. I wrote a couple of SLAM magazine features for the next two issues. I went to Oklahoma City for Round One of the Playoffs, then went to Atlanta for Round Two. I’ve been out pimping for my book, and I finished off my second season of “The Beat” on NBA TV, and even wrote a couple of Playoff-related pieces for GQ.

So I haven’t been completely useless. But with the weather turning beautiful this spring, and without an office requiring my presence hanging around, I’ve spent my mornings juggling emails and phone calls, then set out to enjoy my life. I’ve gone jogging in the middle of the day, taken my dog Starbury on unbelievably long walks, brought Starbury outside while I spent hours sitting on benches in the park outside my house reading and staring at the Hudson River. For the most part, I’ve worked hard at not working. I feel I deserve it, at least for a while, or until the money runs out.

I’ve also spent significant time working my way through my back catalogue of video games. Once I finished those, I recently immersed myself in the world of LA Noire, the new crime procedural video game from Rockstar. It’s a strange ride, the least action-y action game I’ve ever played. The game is set in 1940’s Los Angeles, and you are an up-and-coming police detective, running around Hell-Ay charged with solving a series of gruesome murders. The way you’re supposed to solve these crimes involves scouring crime scenes looking for clues, then interviewing suspects and trying to piece together what happened. There are a few gunfights and chase sequences, but the majority of the time is spent talking to digitized people.

As someone who basically makes a living interviewing people, I thought I’d be pretty good at LA Noire, especially the part where I’ve got the perps in the interview room and I’m grilling them for information. I know how to listen to people, how to broach sensitive topics, how to bob and weave, how to drop the hammer when necessary. Yet, at least in the world of LA Noire, I’m terrible at interviewing people. These criminals lie to me and get away with it. I accuse innocent people of doing horrible things they haven’t done, then let guilty communist sympathizers walk away free.

After a lot of consideration, I think the reason I’m subpar as a digital interviewer is because I’m trying to apply real-world logic to an unreal world. When I ask a suspect if he knew the murder victim and he tells me no, he did not, then refuses to look me in the eyes and gets all fidgety, I immediately believe I’m being lied to. What really matters, however, outside of the game, is whether or not the video game programmer wants me to think I’m being lied to. So instead of just reading and reacting to the characters in the game, you need to read and react to the people who developed the game — the producers, writers, animators, etc. How did these people expect me to respond, and how can I out-fox them? The more I play LA Noire, the more I realize how my initial, instinctive reactions are pretty much worthless. I try and think deeper and deeper, in what can quickly become circular logic. Before you know it, you’re busy trying to out-think yourself.

Similarly, in assessing these NBA Playoffs, I’m not sure if I should believe what my brain is telling me to think. At the most basic level, I think Miami has the best player in the series, and maybe in the NBA, in LeBron. No matter how you rate Dirk versus Wade, Miami has two superstars and Dallas has one. Miami also has home court advantage, and they have two superstars who can drive to the rim, who will get calls and get to the line. And they’ve got LeBron and Bosh, who can reasonably be considered able to defend Dirk one-on-one. So my initial thought is that Miami must have the advantage.

Then, the more I think about it, the more questions arise. Can Marion/Stevenson stop LeBron? Can Terry/Kidd stop Wade? Who runs the point for Miami? Does it matter if they don’t really have a point guard? Can Wade start playing the way he did earlier in the Playoffs? Will anyone on Miami be able to shut down Dirk? Will they be able to even slow him down at all? Can anyone on Miami keep up with JJ Barea? Will JJ Barea’s wifey be at any of the games? Will Miami go zone? Will Dallas go zone? Will the classic LeBron/DeShawn battle rear its ugly head and require someone to “Blow the Whistle”?

The last time these teams squared off in the Finals, back in 2006, was the first time I covered the Finals in their entirety. I spent over two weeks going back and forth from Dallas and Miami, flying over 8,000 miles, even hitting NYC for a day between each stop. My saving graces during that time were the 2006 World Cup, and discovering The Ricky Gervais Show, the greatest podcast on earth. Last night I went back and re-read all my notes from that series. I remember thinking Dallas had it locked up after winning Games 1 and 2, then thinking Miami would definitely win it after taking all the games in Miami, which they eventually did. What ended up making the most difference in the entire series was Dwyane Wade. Yes, he shot a lot of free throws, but he also drove to the basket and forced contact over and over again.

So Wade was the best player in that series. And his team won the series.

Maybe I’m overthinking these Finals. Perhaps, like in LA Noire, I’m overthinking the thinking behind the questions and not looking at simple logic. This all makes me sympathetic toward Ricky Gervais’s sidekick, the great philospher Karl Pilkington of Manchester, a man who once asked, “Does the brain control you or are you controlling the brain? I don’t know if I’m in charge of mine.”

Then again…what if Dirk turns out to be the best player? And what if having a lot of really good players is more important than having two superstars?

OK, look, I don’t have any idea who’s going to win. Trying to keep it simple, I’ll pick Miami in 6. But I wouldn’t be shocked if Dallas pulls this off.

On Tuesday, I’m flying into Miami and I’ll ride with you guys here on SLAMonline throughout Games 1 and 2.

Let’s have some fun.

And I’m glad to be back.