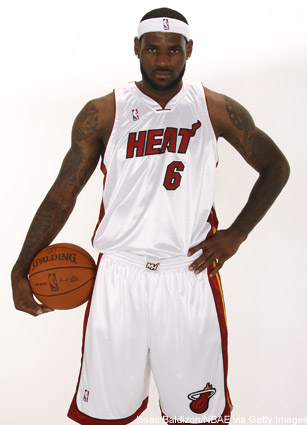 You had to know this was coming, right? The biggest story in the NBA this summer was the free agency of LeBron James. Which means he gets the cover of the next issue of SLAM. (Well, one of the covers. There’s two. We’ll have both covers on the site later this week.)

To me, the most amazing thing about LeBron’s summer was after The Decision, when it seemed like open season on LeBron. The criticism came from people like Barkley, Jordan and Magic, not to mention pretty much every person using any form of social networking, criticizing Bron for his work ethic, for his decision-making process, for a perceived unwillingness to be the centerpiece of an NBA team.

Perhaps this is oversimplifying, but here’s my thought on it: LeBron has a better chance of winning a title with Miami next season than he would have with Cleveland.

If you accept that, then the criticism comes down to people being upset about the way LeBron is choosing to try and win. Forget the why’s: What if LeBron doesn’t care about that stuff? He’s now 25 years old, the two-time reigning MVP, and he’s not only playing on one of the best teams in the NBA, he’s playing for a franchise that’s shown it’s willing to spend smart money and will win titles. Perhaps he will never win a title as a sole franchise player. Maybe he will never be Michael Jordan. But being LeBron James is a pretty good place to be.

I spoke with LeBron over the phone two weeks ago. He was in Miami, working out and getting ready for this season. We talked about plenty, from last season’s Playoffs to his elbow injury, about how he knew Miami was the move for him, and — you might not believe this — we even talked about basketball, how the Heat will play this season and what their expectations are.

Here’s a few snippets of the conversation. To read the full interview, go buy SLAM 142, on newsstands everywhere in the next week or so…

SLAM: You guys haven’t even played a game and already people don’t like you.

LBJ: Well, that’s our thing now. For us, we haven’t proven anything. It doesn’t matter how many players you have, or the collective group you have until you actually go out there and play the game as a team, because this is the ultimate team sport. It doesn’t matter what you have as individuals.

SLAM: You mentioned “team sport.” A lot of former players have come out and said, I can’t believe LeBron’s teaming up with these guys, he should want to play against these guys. What’s your take on that?

LBJ: For me, I feel like my competitive nature is still the same. No matter if I’m teaming up with D-Wade or I’m teaming up with Bosh. My competitive nature is to want to beat the opposing team or the opposing player, whoever is put in front of me. That has not changed. For me to harp on other people, how they feel about my own career, that’s not for me to worry about. I think people should just focus on what they have and go worry about that. For me, I have my goals and I’m going to continue to get better.

SLAM: I get what they’re saying, but aren’t you allowed to want to play with the most talented people you can play with?

SLAM: Before we get too far into the upcoming season, what happened in the Playoffs last year? The Cavs were up 2-1 on Boston and beat them pretty good in Boston, and then they came roaring back.

LBJ: We had a good chance to win that series, and we played well in spurts, but we didn’t play as consistently as Boston did. And I think every Eastern Conference team saw that when they went against Boston, how consistent they were from game to game. Now, they may have lost one game or two games, but I think they were the most consistent team in the Playoffs in the Eastern Conference. That’s why they were able to get back to the Eastern Finals.

SLAM: And you got knocked for not playing well. Not just in that game but really in life, does it ever feel like you really just can’t make everyone happy?

LBJ: I think that’s one thing learned over the summer. I learned throughout my life, that’s one thing you can’t base your life or base your career on, trying to make everyone happy. You have to go out and do what’s best for you and your family, and at the end of the day you know that you played as hard as you can, you know that you gave blood, sweat and tears, then you can be satisfied with that.

SLAM: How do you think it’s going to work with you, Dwyane and Bosh on the floor together? Especially because you and Dwyane are both such perimeter players.

LBJ: I think that’s Coach Spo. Coach Spo is going to put us in position to win ballgames. We’re all ballplayers, we’re all playmakers. We know our ultimate goal is to win championships. I think from the first guy all the way to the 15th guy, if we all have the same goal, it shouldn’t be hard to go out and play the game the right way.

SLAM: How do you know it will work with you and Wade and Bosh playing together?

LBJ: For me, you don’t even think about knowing it will work. You know it’s going to work. You don’t say, I’m going to make my decision and hopefully this works out. D-Wade is a playmaker. I’ve played with D-Wade and I’ve played with Bosh for four years in the summertime. It’s not as long as an NBA season, but you see the sacrifices we was able to make in the summertime, so it wasn’t a hard choice for myself because I know how hard they play the game and I know how much they want to win.

SLAM: Is that going to be the most important part of it, sacrifice?

LBJ: Sacrifice is a part of the game. Now, if you’re talking about sacrificing a few more shots or a few plays here, that’s not a problem. The goal is to an NBA championship, and however we do that, it has to get done. That’s ultimately what we want to do. That’s also why we all came here, to win an NBA championship. It wasn’t so all of us could try to get an MVP award the same year. That’s not what it’s about.

SLAM: The season’s about to start and we’re talking about the way the team’s going to play, but do you think it’s kind of crazy that everyone else is talking about everything but the basketball part of this?

LBJ: I think at this point it’s a little bit easier to sell papers by not talking about the basketball part of it. In the summertime there’s no basketball going on, so the easiest way to get people to read what you’re writing is to write negative things.

SLAM: What will you consider a success next year?

SLAM: What’s been the best part of the summer for you?

LBJ: They best part of the summer for me has been change. It’s a new beginning, a new start. I’m excited about that. The seven years I had in Cleveland, I loved, and I love those fans and will always love those fans for giving me seven great years. I tried to repay those fans the right way by doing what I did on the court. But it’s been exciting. The change, to know I’m going into a situation I haven’t had since my rookie year, and that’s a new beginning, a fresh start. That’s exciting for me. It’s been a great summer. You’re going to have forks in the road, bumps in the road, throughout life. But if you have your goal and you know which way you’re headed, you just go for it and you don’t stop until you get it.

LBJ: When I read that, it was unbelievable. It almost seemed it was like perfect timing. It was like exactly what I’m going through right now. You learn a lot from those who’ve paved the way for all of us.

SLAM: Do you feel a little beat up right now?

SLAM: Not physically, I just mean from everything else.