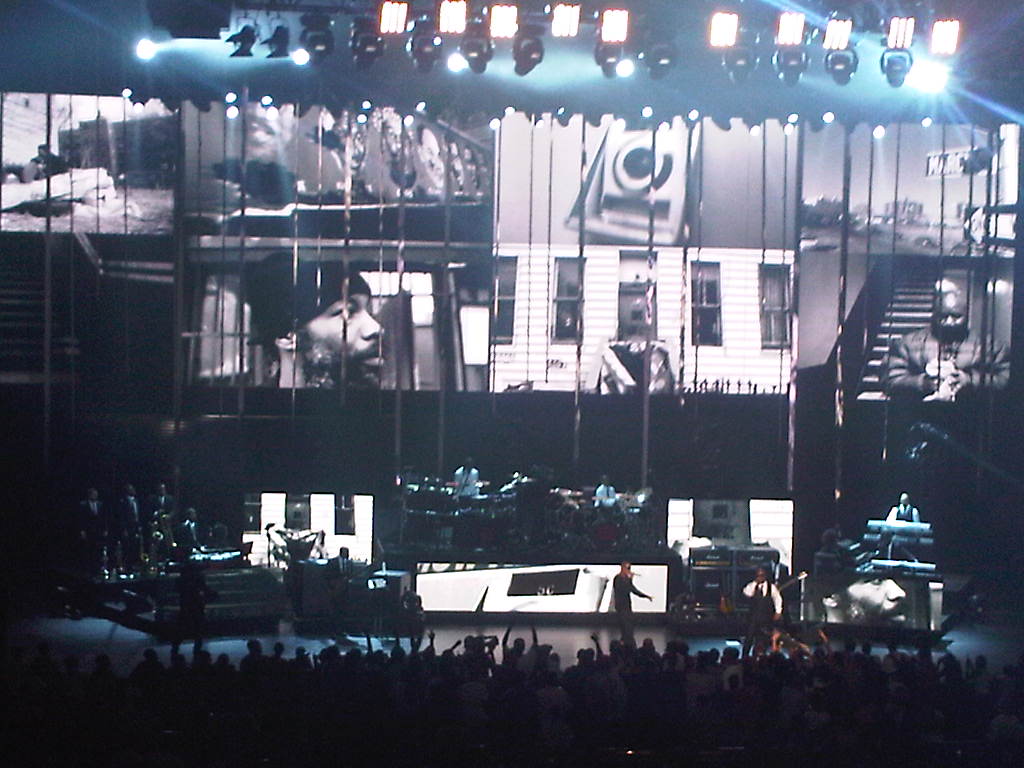 I haven’t blogged in the last week because I just needed to catch my breath. In the last three months we’ve cranked out five issues. You’ve seen four: Kobe/LeBron; SLAM 140; SLAM 141; World Basketball. And Kicks 11 will drop early next week. And now we’re hard at work on SLAM 142. I’m filling in here and there writing news things on SLAMonline, going to the World Basketball Festival, and I turned in about 95 percent of my book earlier this week. Also, I’ve got a couple of other things going on that I’m not allowed to talk about yet but that will be dope.

So…I’m here, but I’m also not here. In the meantime, some other things…

• You might have heard about the World Basketball Festival, which is going down in NYC right now. Well, the WBF kicked off last night with a big event at Radio City Music Hall, which I was lucky enough to score a ticket for.

When we first heard about the WBF, it was originally announced that there was going to be a basketball game played in the middle of Times Square. For whatever reason — I’m guessing a combination of weather fears and permits — almost immediately the location was changed to Radio City. Last night, as Ben and I walked up Sixth Avenue toward Radio City, the sky started opening up and the rain began coming down. So as it turned out, having it in Radio City was the right move.

We knew the event was going to be a scrimmage for Team USA followed by what was being billed as a “special music performance.” The iconic marquee outside Radio City revealed the secret, as it added a few words to the phrase: “special music performance by Jay-Z.” And even though it was on the marquee outside, on the inside, the people on the mic’s (Kevin Frazier and the always entertaining Anthony Anderson) never said it was going to be Jay-Z, like they were still keeping a secret or something.

Even though I’ve lived in NYC for a decade now, I’d never been inside Radio City Music Hall. It was cool enough to be in such a historic theater, even cooler to see a full basketball court set up on the stage. It fit perfectly on the stage, and made for a really dramatic setting.

Maybe too dramatic, actually, as the game itself wasn’t much fun to watch. It was just a scrimmage, after all, so the guys weren’t going all out. Also, it was just too inconsequential to be riveting viewing. What makes the Olympics and the World Championships fun to watch is the national pride at stake. In this game, there were no stakes, other than this team trying to get ready for the Worlds. (And on that tip, my man Matt Lawyue broke down how the team is looking.)

When the game ended, DJ Premier got on the wheels of steel and started playing stuff to keep everyone distracted, and a curtain came down on the stage as they prepared for Jay-Z. I had just assumed Jay was going to come out and do two or three songs with a CD as his backing track, but after a delay of about thirty minutes, I started getting a sense it might be a real concert. About forty-five minutes later, the large screens on either side of the stage switched over to a clock that started counting down from ten minutes, which sent all the kids in the lower levels into hyperdrive.

After the ten minutes had elapsed, the curtain dropped and there was a full band on stage, including a full horn section. There were huge video screens behind the band, and then there on the stage was Jay-Z, the most iconic rapper alive, in an iconic theater, performing some of the most famous songs of the last decade.

And there Ben and I were in the stands. Doing our jobs.

I have to say it was a good day.

• One thing we did the last few weeks was set up a SLAM account on Tumblr. We really did it just to reserve the SLAMonline name on there, but now that it’s up and running, it’s kind of cool. It’s a good way to just see everything that we’ve posted on SLAMonline in the order that it’s gone up. It’s obviously not as rich an environment as SLAMonline, but it works. If you’re already on Tumblr, follow us and we’ll follow back.

• This video has gotten some popularity over the last week and it reminds me of something that happened to me one time.

Back in 2003, I was in Dallas working on a feature about Dirk Nowitzki. I was there for a preseason game, and I guess there wasn’t a lot of media there, because I was given a seat at a press table courtside on the front row, just along the baseline.

You know how every once in a while some NBA player crashes into the press table and wrecks some poor guy’s laptop? I was on high alert, because I didn’t want that to be me. Any time a player got within about 10 feet, I’d make sure to look up and be ready to move if I needed to.

At some point in the game, the teams were in action right in front of me, and Steve Nash made a one-handed bullet pass to a cutting player. The player missed the pass, and all of a sudden the ball was whizzing at my head at about 200 mph. I had just seconds to comprehend what was happening, and I realized I really had two choices:

1) Attempt to catch the ball, which wasn’t a sure thing, considering my hands weren’t in position to catch the ball. Also, if I tried to catch the ball and for whatever reason was unable to catch it and it ended up bouncing into my face or something, there was a chance the play would live in perpetuity on some blooper reel somewhere.

Since the first option was so fraught with peril, I chose the second, more simple option.

I ducked, and the ball zipped over my head. And it drilled a 40-something year old woman sitting behind me directly in the face. POW!

I grabbed the ball and tossed it to the ref as the woman assured everyone that she wasn’t injured, and play continued. I turned around to check on the woman, and she had her hands clutched to her nose, as reactionary tears streamed from her eyes. She looked at me and, her voice breaking like her nose probably was, said, “Why did you duck?”

What I didn’t say but really wanted to: “Why didn’t you?”

• Last thing, in case you want to kill two hours…

I’ve been sitting in with my main man Sekou Smith the last few weeks co-hosting his NBA.com Hang Time Podcast, and we’ve had a lot of fun. Here’s the show from two weeks ago with guests John Schuhmann from NBA.com and Ben Golliver from BlazersEdge…

And here’s the show from this week which was tremendous, with our guests the amazing Coach John Thompson and recently returned SLAM columnist Josh Childress…

You can also download the shows or get iTunes links here or here.

• That’s all I gots. Have a great weekend everyone, and catch you back here next week when I will legally be allowed to tell you all about what I did for an hour yesterday morning:

That’s really all I’m allowed to say. For now. Thoughts on that coming Tuesday…