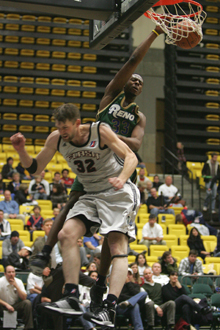 Patrick Ewing Jr. is taking baby steps. The son of Knicks legend Patrick Ewing Sr. made his pro (regular season) debut on Monday with the Reno Bighorns of the NBA D-League in a 114-108 loss to the Utah Flash. Despite helping launch a forth quarter rally, Ewing’s 15 points, 4 assists, 2 rebounds, 2 steals and 2 blocks couldn’t bring home the W.

Young Ewing split his four years of eligibility between Indiana University and Georgetown—his pop’s alma mater. Despite transferring, he was named Big East Sixth Man of the Year and helped the Hoyas to a Final Four appearance in 2007.

The Sacramento Kings took him in the second round of the 2008 Draft and sent him to Houston soon after. In an eerie twist of fate, Ewing was in a trade that sent Frederic Weis (long thought to have cursed the Knicks franchise without ever suiting up) to Houston and away from the Knicks for good.

Once in New York, Ewing made his best efforts on and off the court to make the final roster. After some impressive flashes in exhibition season, the Knicks released Ewing in October. He didn’t play full court ball until his D-League debut. With the retirement of Cuttino Mobley and still to be determined Marbury business, Ewing may find himself a Knick again.

Playing with the Knicks D-League affiliate—the expansion Bighorns—Ewing will continue to learn to grow in the offense that the big team runs in the Garden. While he is free to sign with any NBA team, being in Reno might indicate a return to the Knicks. In any case, Ewing says he’s prepared himself for any scenario.

Ewing spoke with SLAM about his down-low debut.

SLAM: You looked like you were pretty loose out there Monday. You had a pretty nice behind the back pass one of your teammates failed to finish.
Patrick Ewing Jr.: Yeah, I threw a couple of those. I feel alright. It’s all a process. I haven’t played since I got cut back in October. I don’t even know what day that was. This is my first game, and it

started off kind of sluggish, but I feel like I played a lot better in the second half. It’s the first game that is always the toughest, until you get off your feet, so I feel OK.

SLAM: Did you feel like you had all of your tools sharp tonight?
PE: More or less. My shot wasn’t falling like it had been in workouts, but I think that has to do with getting the feeling for being in games again. My passing was pretty good. My vision was pretty good. My defense could have been a little better. I didn’t rebound worth anything tonight and I feel like that’s something I have to get more into the groove of. Other than that, it was a pretty good performance. For someone that hasn’t been on the court for a while, it was pretty good. I haven’t been practicing with this team or anything, so it’s going to take a couple of more days of getting used to the guys on my team here.

SLAM: What was Coach Humphries saying to you back at the bench?
PE: Not much, really. I knew most of the plays. D’Antoni runs the same offense. It wasn’t a matter of knowing plays or something like that. They just might have a different name or something, but they’re mostly the same.

SLAM: Do you know how long you will be in Reno?
PE: Nah, until somebody calls me up I guess!

SLAM: Were you surprised when the Knicks cut you?
PE: Yes and no. I kind of prepared myself for it. Of course, I wanted to play and I felt that there weren’t 15 people on that roster that had outplayed me in games, practice and throughout the preseason, but the NBA is a business and you have to take it as it comes. Now, I’m just out here trying to work my way back to the level of competition that I want to play at.

SLAM: You spent time with the Kings and Rockets before you reached the Knicks this preseason. Did you feel any added pressure while trying out for the team your father played for?
PE: It was no pressure on me. If there was any pressure on me anywhere, it was playing at Georgetown where my Dad had taken that team to three national championship games, so playing for the Knicks

was fun for me. It was fun being out there having fun and playing with a bunch of great guys.

SLAM: Did you have any offers to go overseas? How did you end up in the D-League exactly?
PE: I had offers to play overseas, but to get back into the NBA right now, the D-League is the best route for me.

SLAM: Does it feel good to be playing competitive ball at all? Is it the worst thing that ever happened if you spent a good chunk of the year in Reno?
PE: No. Like tonight, I played like 30 minutes. I think that in the two games I played in New York, I probably played half of that. To be able to come down here and be able to actually get run and be in the same system I was in New York is the ideal thing about the D-League. I just hope that I can help my team get some wins.

SLAM: What would you bring to any NBA team that signed you?
PE: An energy guy who plays with intensity and someone who knows how to work hard. That’s the bulk of it, you know? Play defense, play offense and just go hard all the time. Especially in practice, which is one of my biggest things. I feel like if I can go hard in practice I am going to make my teammates better in practice so that the games are easier to win.

SLAM: Do you feel like you have a real shot at the League?
PE: Yeah, of course. I feel like I have a good shot. It depends on the wants and needs of each team. I feel like I have the talent to play in the League, but it’s other things. I’m not sure what those other things are, but I’ll find out. There are different reasons why I’m not on different teams, but all I can focus is on what I can do now. If anyone is going to hear rumors or little inquiries, it’s my agent, and I tell him not to tell me about anything unless there is a contract to sign some papers. Until then, it will be just a distraction for myself and to my teammates too.