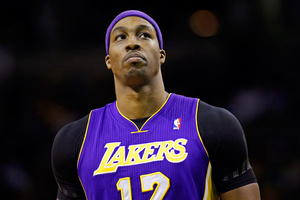 Things look bleak in Laker-land at the moment, with indications being that superstar center free agent Dwight Howard will bolt to another franchise.

Howard has yet to make his intentions publicly-known, but scanning the tea leaves, it appears that he may prepared to move on from Hollywood.

After team sources initially indicated the Lakers were feeling better about their chances after their face-to-face meeting with [Dwight] Howard on Tuesday than they did coming into it, pessimism began to creep back in Thursday, stemming mostly from ongoing questions outside and inside team headquarters about Howard’s ability and willingness to co-exist alongside Kobe Bryant and play for coach Mike D’Antoni. Sources close to the situation stressed that the famously fickle Howard — deliberating at a hideaway in Aspen, Colo. — still was undecided about choosing between the Houston Rockets, Dallas Mavericks, Golden State Warriors, Atlanta Hawks and incumbent Lakers. Yet, there were indications late Thursday that Lakers officials, already bracing for the worst, had begun to rethink their long-held position of ruling out sign-and-trade options in the event Howard decides to bolt to one of L.A.’s rivals.

One source briefed on the Lakers’ thinking said that, if the extra fifth year and nearly $30 million they can offer Howard isn’t enough to hold off the competition, they would be forced to “look at everything.” For months, Lakers officials have privately indicated they have no interest in taking back long-term contracts in a sign-and-trade for Howard, preferring to preserve their salary-cap space for the summer of 2014 and focus on slashing their luxury-tax bill for the coming season.

This latest Dwightmare will be over soon enough, but should the Lakers lose out on the NBA’s most coveted free agent this summer, their fans can expect to have plenty of sleepless nights going forward.