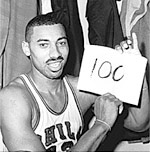 Of course, for many of you today is Maddenoliday, where you call in sick to work and stay home playing Madden all day. I haven’t taken it that far, but I have been playing Madden for about two weeks and I think it’s pretty amazing. I wrote a review of it for SI.com which will be up over here eventually.

I also did something else that’ll show up later over here.

Really no big hoops news today, and the stuff that is in the papers is just the same old stuff that’s been kicking around all week. Still, though, we press on…

• Live from Japan, LeBron says he wants to be the first athlete to become a billionaire and he’s targeting Asia, so much so that’s taking Mandarin lessons. It’ll also be helpful for when he needs to diss Yao during games.

• The Al Harrington to Indy trade is back on again, as the Pacers must have agreed to offer much less than they initially proffered in order to make Hawks GM Billy Knight happy. By the time this thing goes through the Hawks will be getting a second-round 2010 NBDL pick in return for Harrington.

• Tony Parker’s finger is busted, but he doesn’t need surgery, at least for now. Good thing he worked on his jumper last summer.

• LaMarcus Aldridge, however, is getting some cut-up today, and he probably won’t be ready for training camp. Not a good day to be a Blazers fan.

• And finally, good stuff on Wilt Chamberlain, who would have been 70 yesterday.