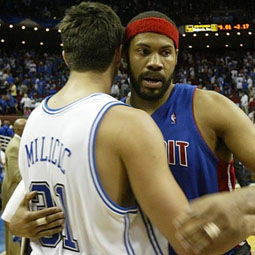 That, taken only slightly out of context, is what I said about this series before it began. I wasn’t telling you anything you didn’t already know, and of course, it’s always nice to be right. Had David Stern allowed it, the Pistons could’ve won this series in three games, maybe even two. The outcome was never, EVER in doubt.

I’ll happily concede to Russ for in-depth coverage of the Pistons’ Round 2 endeavours against his beloved Bulls, but a few thoughts before I go back to my day job…

*Miami. I didn’t watch much of this series, but it’s funny how the thing that a lot of us thought would happen last year (Riley’s weird mix of grumpy, me-first veterans not being able to pull it together in the postseason and the team sputtering out) actually happened this year. Of course, I hear that Wade fella was somewhat less than 100 percent, which might’ve had something to do with it, too.

*Re: Dwyane, funny how he’s about to become the Mike Krzskdkdsessssssski of the NBA Playoffs: His relentless postseason commercials will end up playing much longer than his team does.

*Unless I’m missing something really obvious, how unlikely is it that Lamar Odom waited until his eighth NBA season to have the best dunk of his career?

*Pistons-Bulls. The only NBA game I’ve attended in person in the past four months was Detroit at Chicago last month, and while I’d love to claim that game gave me insights into these teams that illuminate the soon-to-be unveiled truths about this series, I can’t. Rip and CWebb were out for the Pistons, Nocioni was out for the Bulls, and the players who were on the court combined to play an ugly game that taught us nothing (PS, the Bulls won 83-81).

We can, potentially, learn much more from their last meeting, when the Bulls — without Nocioni and Big Ben — went to Deroit and pretty much walloped the Pistons. Both teams had something to play for at that point, and I’m guessing that game will be the Bulls’ inspiration (and the Pistons’ motivation) heading into the second round.

The Bulls actually took three of four from Detroit this year, so there’s that, but Chauncey missed the first loss, so I’m not really gonna sweat the details of the season series. Fact is, both teams are mad confident right now; Chicago theoretically had a much tougher test in the first round (even if it hardly looked like it) so they’ve got that going for them, and the step-up in intensity could catch the Pistons a little flat-footed in Game 1. But then, it’s not like Detroit hasn’t been here before, and given the history between these two franchises, and the Ben Wallace connection, and the fact that whoever wins this series is gonna really like their odds of getting to the Finals and quite possibly winning the whole damn thing, I don’t think intensity will be a problem for either team.

I think both teams will play hard.

Better still, for those of us assigned to cover a meaningless first-round series that the Pistons could largely coast through and still sweep, I think both of these teams will have to play their asses off to win. There will be no coasting in this one. As such, I am psyched for it.

And I guess, if pressed, I’d say… Bulls in six. Or Pistons in seven. You know, either way.