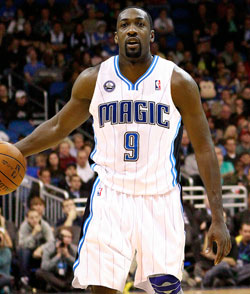 We knew the Magic were looking for a major shakeup and multiple reports confirmed the team was in serious trade talks this morning. Magic GM Otis Smith, however, declined to name any pieces except for Gilbert Arenas.

Well, now, we have all the details. And there’s a lot of them.

As a prelude to another trade involving Arenas, the Magic completed a six-player deal with the Suns. The Arizona Republic has the details:

The Phoenix Suns have agreed to acquire big man Marcin Gortat and swingmen Vince Carter and Mickael Pietrus from the Orlando Magic in exchange for Jason Richardson, Hedo Turkoglu and Earl Clark.

The trade, expected to be made official this afternoon, will also give Phoenix a 2011 first-round pick and $3 million.

Then, in a separate deal, Orlando agreed to send Rashard Lewis to the Wizards in exchange for Arenas, sources tell the Orlando Sentinel:

The Magic and the Washington Wizards have finalized a trade that will bring guard Gilbert Arenas to Orlando in exchange for forward Rashard Lewis, the Magic have announced.

Surely the Magic are making power moves, but whether its new-look roster will make them any more of a contender is up for debate. Will a change of scenery bring back the old Gil and Turk? How will Arenas, Richardson and Jameer Nelson mesh the backcourt?

It’s a huge financial risk as well. Lewis is owed $66.5 million over three years and Arenas and Turkoglu are owed roughly $124 million over four years.