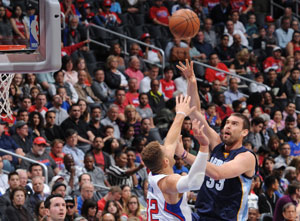 In last night’s match-up between the Memphis Grizzlies and the Los Angeles Clippers, Marc Gasol went down with a sprained left ankle injury in the first quarter. He didn’t return, and the Clips won the contest 94-86. The X-ray results came back negative, and Gasol says he’ll try to be ready for the shorthanded Grizzlies’ Monday night game against the Golden State Warriors, as per ESPN.com:

“A Grizzlies spokesman said X-rays taken on the ankle were negative.

Gasol wore a protective walking boot on his left foot as he departed Staples Center. When asked if he would be available to play in the Grizzlies’ next game at the Golden State Warriors on Monday night, he smiled and said, “If possible, I will get myself ready to play.”

Gasol limped to the bench with 2:10 left in the first and went back to the locker room. Initially, Gasol was said to be getting his left ankle retaped but was officially ruled out for the game at halftime.

The Grizzlies (54-26), already playing without Mike Conley (sprained right foot) and Tony Allen (left hamstring strain), are in a three-way tie for the second-best record in the Western Conference with the Clippers and San Antonio Spurs. They are also tied with the Spurs for the Southwest Division lead.”