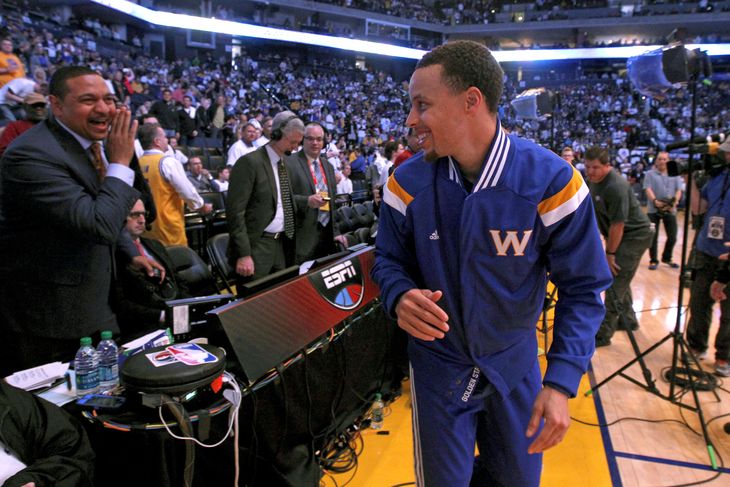 Former Golden State Warriors head coach Mark Jackson became emotional when the Dubs reached the NBA Finals in their first season after he was fired, but he says that calling their games in the championship round against the Cleveland Cavaliers is no big deal.

According to Jackson, it’s just a gig.

Whether he wants to admit it or not, things do frequently turn awkward whenever Jackson is part of a national TV broadcast for a Warriors game. This will only intensify during the Finals.

“To me, it’s an assignment, and my job is to tell the story,” Jackson said. “Sometimes people don’t like the stories, but it is what it is. So to me, I absolutely feel like no matter, if I’m calling a game between my brothers or my parents, the facts are the facts. The story dictates itself to me, and I relay the message to the viewers as good as I possibly can. That’s going to be my job whether it’s the Warriors or anybody else.”

In a task some people have compared to being a videographer at an ex-spouse’s wedding, Jackson’s every word has been dissected for any signs of bias or bitterness. […] “I read articles that I shouldn’t be doing it,” Jackson said. “To me, it was laughable. I’m absolutely winning and having the time of my life calling games with incredible friends and incredible people and working for an incredible organization. So it’s been a blast for me.”

When asked his emotions after Draymond Green came over to give him a hug and thanks during the (Western Conference Finals) trophy presentation, Jackson’s voice cracked as he talked of his pride. […] “To me, people blew out the emotional – a guy came over and said thank you,” Jackson said. “If you came to my church, you would say, Well, he cries every week. People say thank you. People show appreciation. I’m an emotional guy. That was all it was.”