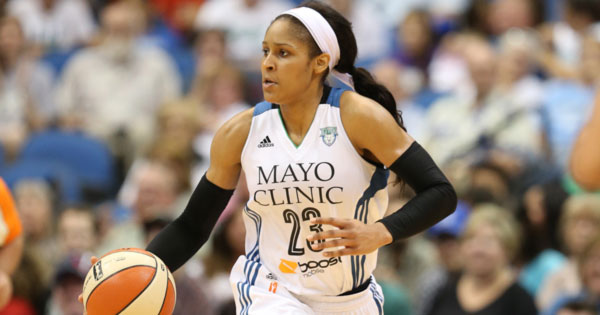 Minnesota Lynx forward Maya Moore has been named the 2014 WNBA MVP, the WNBA announced on Thursday. Moore led an injury plagued Lynx team to the second best regular-season record at 25-9, and made WNBA history by scoring 30 or more points 12 times, including a career-high 48 points against Atlanta on July 12.

Moore led the league in scoring at 23.9 ppg while shooting an efficient 58.6 true shooting percentage. If you’re into advanced metrics, Moore’s PER (29.4), net plus/minus (+23.9) and win shares (8.1) were also tops in the WNBA. She may have solidified her MVP status when she dropped 12 points in the fourth quarter against Phoenix to snap the Mercury’s 16-game win streak on July 31.

Earlier in July, after Moore dropped 32 points in a 93-82 win over Tulsa, Shock coach Fred Williams called Moore “the Michael Jordan of the WNBA.” Moore told the Pioneer Press that she believes the comparison is a testament to her work ethic:

“I’m hoping that he meant the winning habits, the competitiveness, the leadership, trying to make teammates better, willing to learn, willing to put in the work,” she said. “That’s what I think of. I constantly look to get better.”

The 25-year-old received 371 points (including 35 of a possible 37 first-place votes) from a panel of 38 sportswriters and broadcasters. It’s Moore’s first WNBA MVP, but most likely not her last.