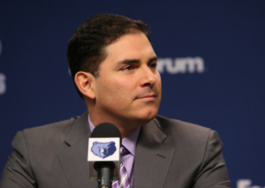 The Memphis Grizzlies have fired CEO Jason Levien and assistant general manager Stu Lash, the team announced in a statement on Monday. In addition, the futures of Grizzlies coach Dave Joerger and executive VP of basketball operations John Hollinger are now unclear, since Levien hired them both. Per ESPN:

The Memphis Grizzlies are in the midst of a major shakeup for a second successive spring after a clash between team owner Robert Pera and CEO Jason Levien has resulted in Levien’s abrupt departure from the franchise, according to sources close to the situation.

Levien, who helped broker Pera’s purchase of the franchise from the late Michael Heisley in June 2012, left his post after a breakdown in his relationship with Pera, sources told ESPN.com. The Grizzlies have likewise dismissed assistant general manager Stu Lash.