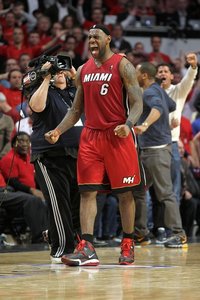 More than the amount of world-class talent they acquired last summer, the Miami Heat almost seemed to be built on the hatred of their critics.

All season long, it seemed that everyone was rooting against them. And of course, that did nothing but fuel their run, all the way to the doorstep of an NBA title.

The Miami Heat know they’re widely disliked, which they’re more than happy to embrace. Micky Arison, the team owner, playfully dares fans and media to be on the side of the Dallas Mavericks in the title round, an encouragement they probably didn’t need.

“We look forward to a fun couple of weeks now with a group of guys who are very deserving,” [Micky] Arison said Thursday. “The thing about this is, we knew when this all came together that we’d have a chance to really win big. We didn’t know if we were going to actually win it. But we’d have a chance.”

Arison said that hasn’t been the feeling around the franchise the past few years. Since 2006, the Heat have been eliminated in the first round three of the last four seasons. The one season they didn’t make the playoffs resulted in the team’s tying the franchise record with a 15-67 finish in 2007-08. That represented rock bottom for [Pat] Riley, who retired from coaching after that season to work solely in the front office. Now, the Heat are in position to finish back at the top of the league. Arison had one request of some national media members as he left the United Center on Thursday.

“Please pick Dallas,” Arison wisecracked, insinuating there might not be any room for critics to now congregate on the Heat’s bandwagon.

The Dallas Mavericks will undoubtedly be the sports-watching world’s darlings now, an underdog team looking to avenge its epic, heart-breaking 2006 NBA Finals collapse against these same Miami Heat.

One gets the nagging feeling, though, that people who hate the Heat shouldn’t expect to receive any sort of satisfaction from the upcoming series.