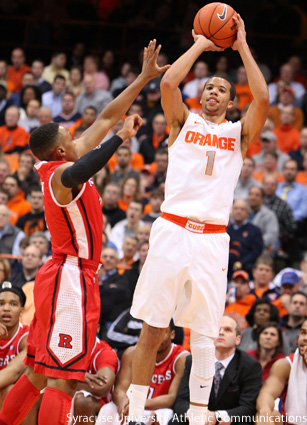 By now you’ve seen the highlights and read the press clippings from January’s epic contest between the Louisville Cardinals and Syracuse Orange. (If not, go ahead and perform a quick Google search.) With the No. 1 Cardinals in control of the game and heading toward victory, Syracuse sophomore PG Michael Carter-Williams brushed off his first half woes and took the game over.

The 6-6, 185-pound guard scored 11 of Syracuse’s final 13 points and made the deciding play of the game when he picked off an errant pass from Peyton Siva, the Cards’ diminutive but talented point guard, and drove the length of the floor, slamming it over the 6-11 Gorgui Dieng to put the Orange up for good. That winner put an emphatic stamp on his 16-point, (8-turnover), 7-assist, 4-rebound, 4-steal performance and solidified his spot on the national scene. MCW walked off the court with a huge smile while the red-clad capacity crowd left in a state of shock.

“Michael was the reason we won, getting that dunk,” senior Brandon Triche told the Associated Press after the game. “I might have kept us in the game [Triche finished with 23.—Ed.], but he’s the reason we won.”

Exactly a week later, while playing against Villanova at the Wells Fargo Center, a mean-spirited chant that alludes to an embarrassing off-court incident rains down on Carter-Williams. It’s probably not the cause of it, but MCW isn’t playing well—he’ll finish 4-17 from the floor with 5 TOs—and the Orange are allowing an inferior opponent to hang tough.

As the clock winds down, the Orange cling to a 2-point lead when MCW steps to the line with a chance to put the game away. After hitting the front end of a one-and-one, he bricks the second and gives the unranked Wildcats a shot to tie it, which they do on a last second three by freshman Ryan Arcidiacono. When the buzzer sounds, after an extra period of play, the scoreboard reads 75-71, and Nova Nation storms the court. In the midst of a sea of blue and white, a dejected MCW—the smile he sported following the Louisville game replaced by a furrowed brow—slices his way to the locker room.

Much like those two games, Carter-Williams’ basketball career has been defined by highs and lows. He’s gone from the end of Cuse’s bench as a freshman to leading the nation in assists for most of the season and looking like a likely Lottery pick as a soph. The rise feels like it happened overnight, but in reality, MCW has been working for this since day one.

Raised in Hamilton, MA, about 30 miles north of Boston, Carter-Williams was brought into this world with basketball in his blood. His mother, Amanda Carter-Zegarowski, is the girl’s basketball coach at Massachusetts’ Ipswich High and his father, Earl Williams, played college ball at Salem State. Though his parents split, Carter-Williams’ basketball education actually intensified after his mother remarried to Zach Zegarowski, a former assistant at Charlestown High. “They are everything to my career,” says the 21-year-old. “If it wasn’t for them, I wouldn’t even play. They taught me how to play the game and how to learn the game. All four of my parents [his father also remarried—Ed.] are great, and they just teach me the way in basketball and in life.”

As a 5-9 freshman at local Hamilton-Wenham High, Carter-Williams averaged 20 points a game while leading his team to the league championship game. That summer, the baby-faced teenager literally outgrew the competition and transferred to Barrington (RI) St. Andrew’s Prep. While there, MCW continued to light teams up and finished up his senior year averaging 23.9 points, 8.3 boards, 5 dimes and 2 steals. Those numbers were impressive enough to earn him Rhode Island Gatorade Player of the Year honors, as well as spots at both the 2011 McDonald’s All-American Game and Jordan Brand Classic.

Even with those accomplishments, most college scouts and coaches were turned off by his rail-thin frame and projected him as a scoring guard. Syracuse head coach Jim Boeheim believed in Carter-Williams as a pure point guard and saw him as a player who could man the top of his vaunted 2-3 zone. The HoF coach offered him a scholarship, and MCW signed on with the Orange right before his junior season. While he is happy with his current situation, his competitive streak flares when he speaks on his recruiting process. “Syracuse is one of the schools that was on me early and that’s a big reason why I committed early,” recalls Carter-Williams. “Just the teams that took people ahead of me…I always play with a chip on my shoulder to show them I can play.”

Once on campus, MCW caught a harsh dose of reality. Playing behind Triche and current pros Scoop Jardine, Kris Joseph and Dion Waiters, Carter-Williams rarely saw the floor as a freshman. Though he performed well when given a chance, the lack of consistent burn resulted in anxiety and tearful calls home to his parents. It also led MCW to put in extra hours with position coach and Cuse legend Gerry McNamara.

“Working with him last year, we knew he was very talented,” says McNamara. “It was a frustrating year because he is so talented and was playing well, but we were so deep at that position that we wanted more experience there when it came to game time. It was frustrating for him, but he kept working hard and I think it’s paying off this year.”

Adds Carter-Williams, “I just kept working and getting better so I would be prepared for this year. It was a great learning experience for me and made me appreciate the game.”

The core of last season’s Elite 8 team moved on and left a huge void. The staff entrusted MCW to fill that void, and he’s come up huge for the sixteenth-ranked, No. 4 seed in the East Region, Orange. He’s averaging a team-high 35.2 minutes, 12 points, 7.7 assists (third in the nation), 4.8 rebounds and 2.7 steals.

With no disrespect to Creighton’s Doug McDermott or Michigan’s Trey Burke, Michael Carter-Williams is the most important player to his team’s success. Whether he’s pulling out all the stops, as he did against Louisville, or stumbling down the stretch, as he did against Nova, MCW’s play directly correlates to the outcome of Syracuse’s games. It’s simple: MCW is to the Orange what GZA is to the Wu-Tang Clan. When he’s at the helm and performing well, the rest of the team forms like Voltron to dominate the Big East. Word to Tical.

Of course, Carter-Williams has his flaws and a ton of room for improvement. He turns the ball over too much, doesn’t shoot consistently from the field or the stripe, and he needs to work on finishing strong at the rim before he can compete at the next level. While flawed, he has that one intangible you cannot coach: When the game is on the line and it’s crunch time, his game elevates. “He’s vocal, and more than anything, he leads at the end of games,” says McNamara. “His level of play goes up, and he has a will to win not a lot of players have. His level of play at the end of games really skyrockets, and I think that’s infectious.”

It’s those late-game flashes of brilliance, insane assist numbers and mammoth potential that have NBA scouts drooling. Come June, if he decides to go pro, Michael Carter-Williams will be shaking David Stern’s hand early on during Draft night. But before all that, he has a few more crunch-time plays to make on the NCAA’s biggest stage. 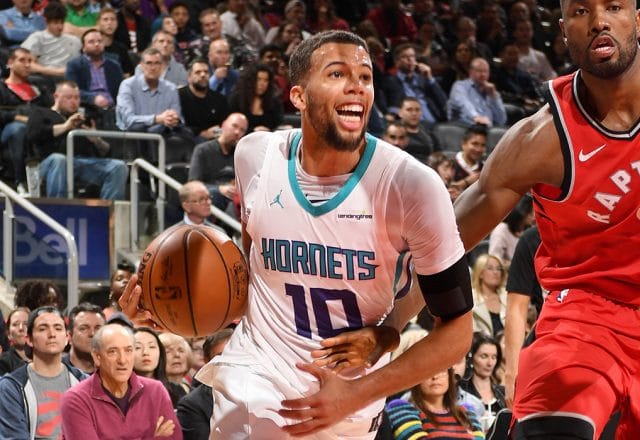 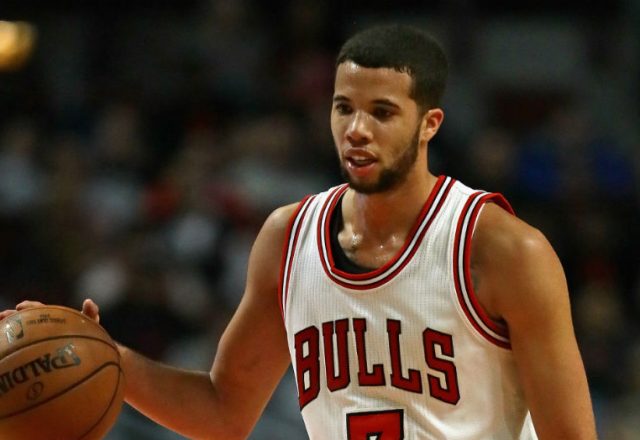