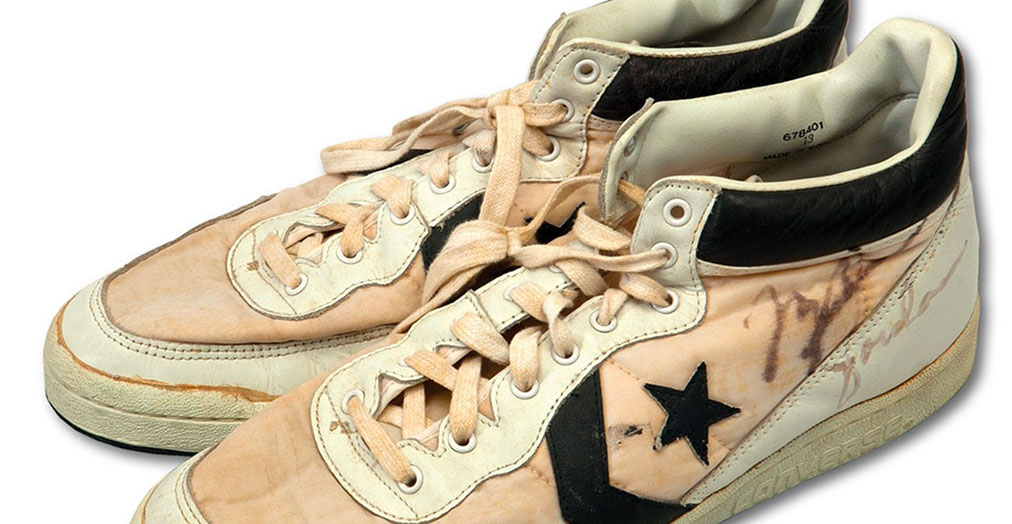 Michael Jordan won his first Olympic Gold Medal in 1984, leading the team in scoring while getting backup from Chris Mullin and Patrick Ewing. Behind MJ’s 17 points per game, the USA won by an average of 32 in their eight games.

The sneakers that he wore during the Gold Medal Game are currently up for auction. Here’s more straight from SCP Auction:

The white and navy blue trimmed shoes are a canvas and leather mid-top design. The navy blue Converse star logo appears on both sides and again on the upper heels. The size 13 and manufacturer codes are stamped on the interior. The original white laces are present and they even include MJ’s very own navy blue orthotic inserts. The shoes are very well-preserved with all structural and aesthetic components perfectly intact. Game use is evident throughout, with proper heel drag, leather creasing and light scuffing. Jordan has signed both sneakers—the right shoe on the inner ankle, the left shoe on the outer ankle—in 6-7/10 black marker in his early, pre-NBA autograph form. Perhaps the only blemish is the slight fading of the white canvas paneling to a now more off-white or cream color.

The shoes come with impeccable provenance from the ball boy, who worked nearly every USA game at the Forum. This ball boy just so happens to be the son of Laker great Gail Goodrich, who oversaw game operations at The Forum for the entirety of the Olympic tournament. A detailed letter of provenance from Goodrich’s son explains the story of how this fortunate 11-year-old ball boy procured the shoes directly from Jordan and got them signed in the locker room right after the gold medal final. The attached image of his official ’84 L.A. Games full access Forum badge provides further verification.

The highest bid for these kicks is set at more than $31.3K with a little more than two weeks remaining.