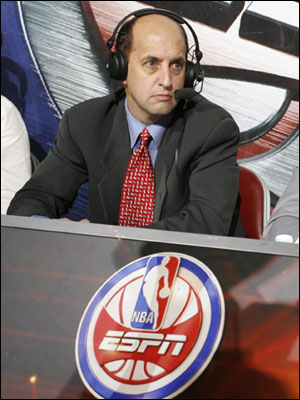 Even the most ardent Orlando Magic fan can admit this much: Stan Van Gundy failed miserably in the NBA Finals. Not to say that had he done a better job, his team would’ve won the title, but they might have been given a better chance.

His panicky and sometimes completely nonsensical decisions throughout the championship round were ripe for criticism — and were ripped in just about every medium — but hardly a peep was uttered about the embattled coach by the crew in charge of bringing the action to millions of television viewers.

Hmm, I wonder why….the New York Times gets to the bottom of the issue:

“I think this was harder for him than he thought it would be,” said Mike Breen, whose command as the play-by-play voice of the finals continues to grow. “This was uncharted waters. I didn’t know how he would do it.”

“At one point, during an incredible Lakers roll, maybe in Game 1,” Breen said during a telephone interview Monday, “I was making some loud, juiced-up calls about some Lakers baskets. I saw him sitting next to me, and he’s down. His brother’s team is getting shellacked. I hated to sound so enthused, and I told him I was sorry. He’s a longtime friend, he’s my partner, and you feel for what he’s going through.”

My favorite part of JVG’s announcing fail was when he kept killing Jameer Nelson for poorly guarding Derek Fisher’s overtime-forcing three in Game 4, and not a single mention of Stan’s role in the fiasco.

The lesson here, as always: Don’t announce games in which family members are desperately trying to win a championship.