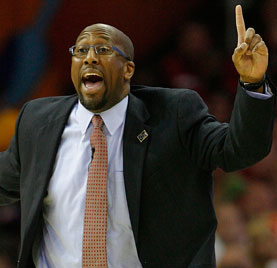 Rick Adelman and Stan Van Gundy finished in second- and third-place, respectively, in a tight 151-, 150-point battle. Erik Spoelstra, interestingly received the second-most third place votes, but finished seventh overall due to the one-point value assigned to third-place selections. Phil Jackson, despite guiding the Lakers to the Western Conference’s best record (by far), received just one first-place vote. Greatness is expected of Jackson, but he’s only received the COY once in his career (1996).

Times have changed in Boston as Doc Rivers, last season’s Coach of the Year runner up, finished 10th this season, despite a 62-20 record and a sidelined Kevin Garnett for over 30 percent of the season.