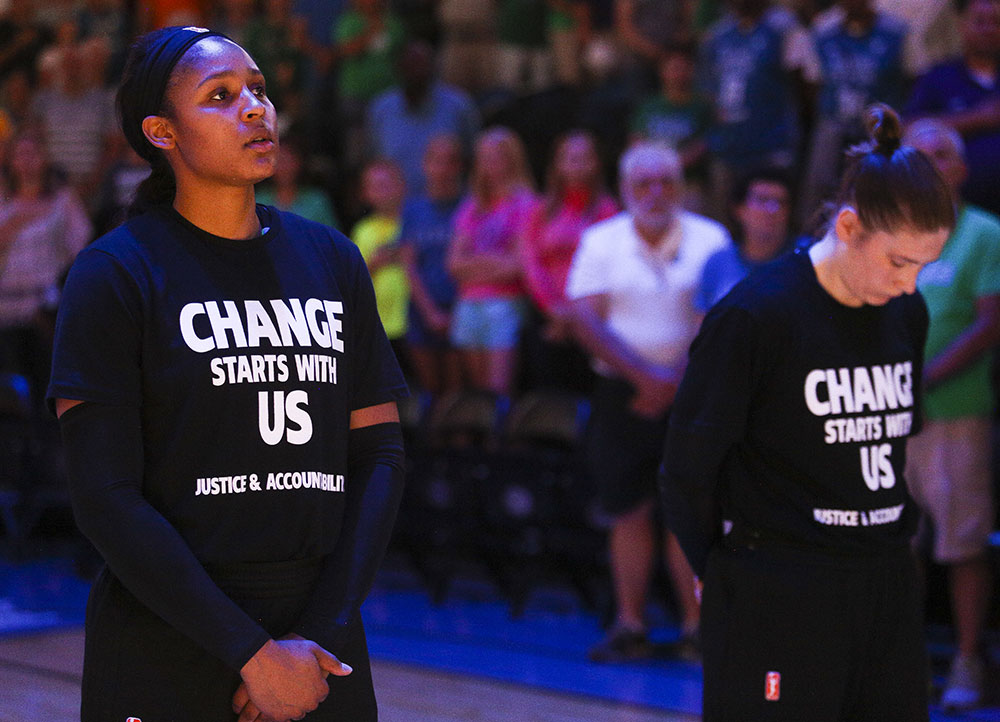 Four off-duty Minneapolis police officers, who were working security for Saturday’s Lynx game, walked off the job after the players held a press conference denouncing racial profiling, then wore Black Lives Matter shirts before the game.

"This is a human issue & we need to speak up for change, together." -Maya pic.twitter.com/tyfl65Ag81

Team captains Maya Moore, Rebekkah Brunson, Lindsay Whalen and Seimone Augustus spoke to the media before the game. Moore said, “Senseless violence and retaliation will not bring us peace. We as a nation can decide to stand up for what is right, no matter your race, background or social status.”

The Lynx’ coach Cheryl Reeve offered this on twitter:

To rebut BLM with 'All Lives Matter' implies that all lives are equally at risk, and they're not. #BlackLivesMatter doesn't mean your life

isn't important if you aren't black – it means that Black lives, which are seen without value within White supremacy, are important.

The shirts, which were printed without notice to the WNBA, read, “Change starts with us—Justice & Accountability.” On the back of the shirt were the names Philando Castile and Alton Sterling, the Dallas Police Department shield and, at the bottom, “Black Lives Matter.” Castile and Sterling were both shot and killed by police officers last week.

Castile died just a short drive from where the Lynx play, in the suburbs of St. Paul, during a traffic stop on Wednesday.

President of the Minneapolis Police Federation, Lt. Bob Kroll, not only “commended” the cops, but said, “If [the players] are going to keep their stance, all officers may refuse to work there.” From the Star Tribune:

Lt. Bob Kroll, president of the Minneapolis Police Federation, the union that represents rank-and-file officers, praised them for quitting. “I commend them for it,” he said.

Kroll said the four officers also removed themselves from a list of officers working future games. He did not know who the officers were. “Others said they heard about it and they were not going to work Lynx games,” he said.

Asked if other officers will fill in for those who quit, Kroll said, “If [the players] are going to keep their stance, all officers may refuse to work there.”

Asked about a report that seven or eight officers had walked off the job, Kroll said, “They only have four officers working the event because the Lynx have such a pathetic draw.”

The Lynx turned out to be just the first to take a stand. The members of the New York Liberty paid tribute to the shooting victims and held a similar pre-game press conference on Sunday at Madison Square Garden.