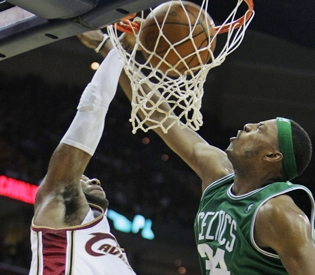 After a difficult first half for Cleveland, the Cavs got going in the third quarter, with the spark coming from a guy who doesn’t have a great big-game track record and is so key to Cleveland’s chances of winning it all this year: Mo Williams.

Midway through the third, with his team down 11, Mo got loose on a fastbreak and, with Paul Pierce approaching, turned his hand over and threw down what is being called the first dunk of his Cleveland career. As it reads in the Boston Herald:

“It was big play,” Williams said of the dunk. “Anything uncharacteristic that happens always sparks energy. I thought (Pierce) would block a layup.”

Williams was just getting started, as he followed the dunk with a jumper, then a floater in the lane, then another jumper followed by a pair of free throws.

Granted, LeBron James (35 points, seven rebounds, seven assists) was fantastic, but Williams may have been the difference.

“I told Mo if he ever dunked a basketball in a game, it would spark us,” James said. “It not only sparked the whole team, but it sparked him. He took over the third quarter.”

Williams scored 14 in the third on his way to 20 points. Rondo scored six in the entire second half.

“It was a big stretch,” Celtics coach Doc Rivers said of Williams’ third-quarter run. “We really felt going into this that he’s one of the guys that you really have to focus on. I thought we let them play way too comfortable in the second half.”