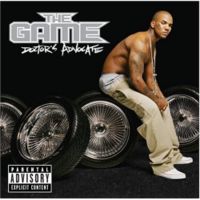 To say that The Game has had a very turbulent career would be an understatement. First he was the protégé of Doc Dre. Then he became a G-Unit soldier. Then he sold 2 million records and became the King of LA. Then he got kicked out of G-Unit and became an outcast. Then 50 started claiming that he wrote half of Game’s album. Then his man Peanut or P-Nut got shot in New York, allegedly by G-Unit bodyguards. Then came the infamous peace conference between him and 50 in Harlem where 50 donated like a million dollars to the Harlem Boys Choir. Game added a few thousand (come on, Game still hadn’t got a royalty check). Then Game released like a thousand G-Unit diss records and mixtapes. (All were dope, by the way.) Then he was dropped from Aftermath. (Guess Dr. Dre felt pressure from 50 to drop him. Maybe 50’s middle name is Interscope.) Then Chuck Taylor got into a brawl with another respected west coast MC, Rass Kass, who is now threatening to end Game’s, um, career amongst other things. And still, in-between all of this there’s been rumors flyin’ around about Chuck’s strippin’ days (wouldn’t that make him and Eve the idea hip-hop couple?), his Blood credibility and his stint on “Change of Heart.” (Now that’s true. Saw it on youtube.) Oh, and did I mention that he got a butterfly tattooed on his face? (You know he did that to impress some celebrity chick.)

And now all eyes are on the Game. Can he show and prove that he doesn’t need Dr. Dre’s production or 50’s pen to create yet another West Coast masterpiece? Well, I just heard his sophomore album, and with no signs of a jinx, I must say that Doctor’s Advocate doesn’t fail to impress.

Now, I don’t know the official track listing, so I’ll just talk about them in random order. First we have the Urban EP Pope produced “Lookin’ At You,” where we find Mr. Taylor stating “I’ll never fall off even without the Doc/you sellin’ your soul trying to stay on top/ check your kotex/you ain’t moving shit like the hand on a fake ass rolex…” Obviously this is a man with a big chip on his shoulder. What bugged me out about this track is that I thought it was Dr. Dre spitting it. But no, it was actually The Game. He musta wrote this for Dre but kept it once he was dropped from the label.

Then we have “Remedy.” This Just Blazed produced banger is gangsta. I’m sure if Game was still on Aftermath, Dr. Dre would’ve bought this beat from Just and claimed it his own. Listening to Game’s nasty metaphors and sick flow over the wicked piano keys and drums is bound to make this song the stand out track of the album.

Surprisingly enough, the Will.I.Am produced “Compton” was hot to death. The rusty drum sound made the song have an early ‘90s feel.

But of course it wouldn’t be an Interscope album without production from Scott Storch. “Let’s Ride” had that real laid-back-cruising-on-the-ave-with-the-top-down feel to it. I was definitely feeling that track. “Too Much” seemed more like a mixtape beat than an album cut. The bells on the track sound dope and have a dope rhythm, but the drum was kinda lame on it. Storch coulda done so much more with this beat — maybe he’s getting lazy? If Game didn’t flow hard and kick ill rhymes I would not mess with this track. But he did his thing and Nate Dogg never fails to kill hooks, so I’ll let this one bump. You know what I’m sayin.

And never being one to hold his tongue, Game spills his emotions with a drunken flow (ala “Doctor’s Advocate”), admitting: “Dre, I ain’t mean to turn my back on you/but I’m a man and sometimes a man do what he gotta do…I was 12 smoking chronic in ’92/I had a choice, be like Mike or be like you…” Like a man apologizing to his father, Game gets his message across. Why Busta’s on this joint, I have no idea. But I guess Game felt he needed Busta to help him reach out to Dre.

Even though I do feel that the album could’ve done without the tracks for the females, “Around The World” (Jamie Foxx is all over the place nowadays, ain’t he?) and “Ol’ English”, this album definitely vindicates the man everybody shuns. He did better on his sophomore album than everyone else on G-Unit has so far. (I can’t wait to hear Young Buck’s “Buck The World”). I have to give this album four Gangstas.

Does he outdo his debut album on Doctor’s Advocate? No. Does he give us a quality hip-hop album? Definitely. His beats are on point, his rhymes are sharp and his flows change currents. He even held his own when spitting alongside Nas on the Just Blaze tailored “Why You Hate The Game”. Now that’s saying something.

Now that we’ve established that the album is in all actuality hot,  the only question that remains is, will it sell?