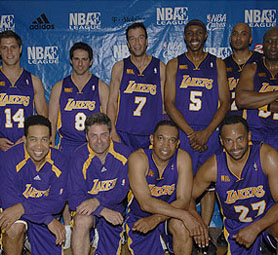 The scene – the NBA E-League Super Saturday, including the Championship Game, the Three-Point Shootout and the All-Star Game. If you are not familiar with the E-League, it’s a souped-up rec league featuring all types of Hollywood-affiliated ballers. It’s being going on for 10 years now, has 16 teams with a 15-game schedule and full playoffs, and is now fully NBA supported – the best part for the players. Every team takes the identity of a real NBA team, is furnished with the official gear (even the “new” ball), has refs wearing NBA uniforms, etc.  Saturday’s events went so as to feature members of the Clippers Spirit dance squad, the Clippers Fan Patrol, and the Phoenix Sol Patrol. But before I even bore witness to any of that, I knew this wasn’t your average rec league when the cars being parked outside they gym included a Ferrari and a slew of Benzes!

Let’s get one thing straight though — this ain’t the All-Star weekend celebrity game, where your Q Score carries more weight than your assist to turnover ratio. Many team members are not instantly recognized, and are just guys that love basketball, and happen to be in the entertainment industry. These guys can play, and they take the game very seriously. Numerous guys arrived early to warm-up or receive treatment and tape jobs. Ain’t no play, like Pastor Troy.

The Championship Game pitted the E-League’s Lakers vs. the Hawks.  Each team did have a big time star listed on their roster (Mark Wahlberg for the Lakers and Bow Wow for the Hawks), but neither made an appearance. On this day, the Lakers were led in star power by Wood Harris (Avon Barksdale from The Wire) and in basketball ability by music manager Mike Law and director Aaron Courseault. Also of note on the Lakers team, was team manager Johnny Alves – cousin of the Wahlbergs and the true life inspiration for Entourage’s Johnny Drama character. Classic. On the Hawks’ side of things, it seemed like they were Sam Jackson-in-a-suit away from a Coach Carter reunion. With two stars from the film – Antwon Tanner and League MVP Nana Gbewonyo – the crowd had a good time shouting out Sam Jack quotes, throughout the game, whenever they touched the rock. The Hawks roster also included O-Town member Trevor Pinick, and the older brother of Larenz Tate (seen in the crowd), Laron Tate.

The Lakers jumped out to an early double-digit lead behind a run that included the play of the day. Mike Law, with a Khalid El-Amin build, put a disgusting crossover on Laron Tate, then dished to a teammate for an easy lay-up. The crowd loved it, and a guy right behind me even said: “That crossover was so good MY ankles are broken.” The Hawks were in a funk all half with Gbewonyo jacking (and missing) 3’s, and nobody else able to get anything going. It was a 10-point halftime lead for the Lakers. The margin stayed right there for most of the second half. Then, with about 3 minutes remaining, the frustration of the day seemed to set in, and the Hawks began the desperation “foul and three game”. When that didn’t work, they stopped, returned to just playing ball, and everything started to click. A three here, then two turnovers – an over-and-back call and a steal – converted into points, and now the crowd, mostly quiet all day, was going crazy! Everyone was standing and cheering and the frenzy seemed to affect the players. The Hawks had the ball, down by 3, and the resulting possession was pure chaos. There were multiple shots/heaves, mad scrambles for loose balls – all fruitless. The Lakers finally grabbed the rock, made two free throws to ice it, becoming the E-League Champions!

Don’t think for a second that these guys weren’t emotionally involved. Lakers players, best exemplified by Wood Harris, were running around celebrating like school kids, while some Hawks players were clearly upset, sitting on the court with their heads buried. The champs received the full treatment, with a replica “golden ball” trophy given to the team, as well as individual glass trophies for each player. Aaron “Kobe” Courseault earned game MVP honors with his clutch 27 and 10 double-double.

The 3-Point Contest followed, with what seemed like a million contestants, the least deserving of which was Donald Faison who threw up brick after brick, but with a smile on his grill the entire time.  It came down to two cats with legit J’s: Adam Morrison look-alike Michael Westphal, and veteran actor/3-time defending champ, Cylk Cozart. Cozart has an ultra-sick J with crazy backspin. Each round he would overcome his inability to knock down anything from the opening corner, by damn near running the table on the remaining racks. The finals were no different, as he survived a scare from Westphal with a 1 point victory, taking down his 4th title.

The finale of the day was the All-Star game. Where the title game was more of an intense, grind-it-out, half-court affair, the All-Stars, as you would expect, were looking to get up and down. There were plenty of long-range bombs, fast breaks, and even a few dunks. I loved the West’s “Wallace-To-Wallace” backcourt of Percy Daggs, III (Wallace on Veronica Mars) and Michael B. Jordan (Wallace from The Wire) – easily the two fastest (and shortest) players on the court. Somewhat inexplicably, as he was a bench guy for his team, Wood Harris was on the West squad as well, so with Donut (the little kid who stole all the cars in the most recent season) in the crowd, The Wire was in full effect.

What have we learned?  Well, Hollywood’s dream world extends well beyond the big screen.  In Hollywood Land, even your hobbies and leisure activities are given the fantasy treatment.