Report: Lakers, Knicks Would Lose Most in Ticket Sales 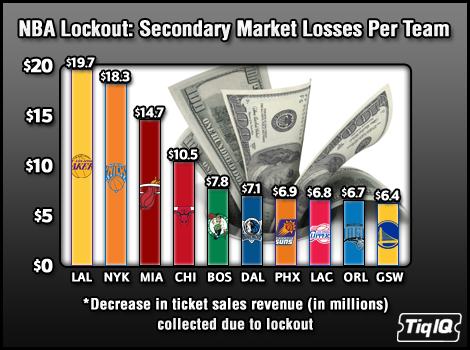 With the distinct possibility of a prolonged NBA Lockout, Ticket Intelligence and Statistics looked at the economic implications of both a full and a half season of lost ticket sales, for each team and the league overall. Below are the full calculations, all courtesy of TiqIQ:

3) Percentage of tickets sold in the secondary market for each game: 10%.

After running the math, it is no surprise to see the biggest markets would be affected the most. Los Angeles, New York, Miami and other big cities are unsurprisingly near the top of the list. For a Google docs version of the data, click here.

As for the league-wide impact, for a full season, NBA teams would collectively lose $184 million in ticket sales. This compares to the $340 million loss that NFL would have had in the event of a full season lockout. With the NFL, though, there was always a sense that we were witnessing a negotiation, bound to end in resolution. With the NBA, the feeling is anything but the same.