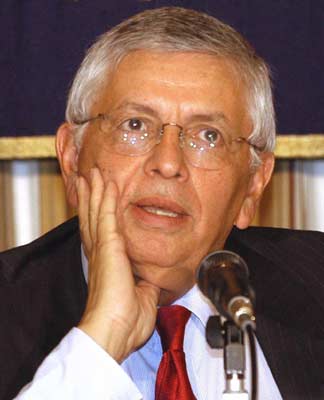 There was a story last week in the New York Times in which NBA commissioner David Stern discussed the lack of development of high school basketball players — both socially and athletically — on the amateur level. Stern appears to be distressed by the current system, particularly the summer circuit featuring AAU teams sponsored by shoe companies, involving so-called runners and other potentially unsavory elements.

He also appears to be aghast at finding out that there are some high schools out there that exist pretty much solely to develop high school players and get them ready for the NBA. Stern says that when he read back in February about these schools he “was breathless.”

Stern also says, among other things:

“I think we could do a better job of rounding and grounding those kids so the adjustment to a professional life is a happy one. I’m serious about attempting to improve the overall situation.”

“College coaches can’t talk to kids, but street runners can or shoe representatives can? What has happened here is that the system has a lot of parties, including the N.B.A., all going the wrong way.”

The article goes on to talk about the possibility of an “NBA Academy,” where kids would go to school and work on basketball full-time, similar to the way European basketball teams handle their prospects. The story concludes by saying that the “notion of an academy makes sense to people at all levels of basketball.”

What initially struck me as interesting here is the dichotomy in Stern’s feelings. For instance, he says he was “breathless” upon learning about the basketball factories, but at the same time he wants to essentially create a basketball factory with the NBA’s stamp of approval. This all sounds righteous on the surface, but I’m also sure this is partly finance talking, as the NBA would love to find a way to have their name attached to the best high school basketball players in the U.S.

(And upon further reflection, it’s pretty ridiculous that Stern claims to not have known anything about these schools until February, considering that some of the best guys in the NBA right now went to schools like this just to play ball, get out of high school and into the NBA. The system has been the way it is for a long time, and if Stern really just discovered this stuff a few months ago from reading a newspaper article, the NBA has had their heads buried deeper in the sand than I thought.)

What Stern is hinting about here sounds feasible, although having just one huge basketball academy seems like it would be counterproductive to have hundreds of kids all in one place, which would probably decrease the amount of intensive teaching time available.

Why can’t each NBA team have their own school and work regionally to develop kids? Because teams would not be happy about having to spend money to develop a kid that would make millions elsewhere. Let’s say the Wizards had a traveling program in the Baltimore/DC area that Carmelo Anthony came up through. You think Abe Pollin would like seeing Melo in that Nuggets uniform? And if the permanent rights to a player were assigned based on area they grew up in, that would set off a huge under-the-table scramble to get the best high school kids to relocate to areas where owners were willing to spend the money to make it back later.

Mark Cuban had a pretty brilliant blog post about all this a few weeks ago. Cubes suggested basically signing up kids to play minor league basketball while they’re in high school. Cuban stresses the development aspect of the idea, making sure the kids are supervised and taught about life and such, and even notes that if executed correctly, this idea could put the NCAA out of business.

Of course, the NCAA wouldn’t go out of business because of this (they still make a ton of cash on college football, remember), but it probably would put a dent into college basketball viewership and attendance.

The real question here seems to be who should be responsible for all of this. In Europe the teams run things themselves, and if they make a bad investment, they pay for it down the road. The NBA probably wouldn’t allow that type of system to occur without some seriously minute ground rules, if only because the teams are so financially interconnected as far luxury taxes and TV rights, etc.

The other thing that bothers me here is that it would seriously put a dent into the high school basketball scene, and as someone who went through that system and immensely enjoyed my experience, I’d hate to see kids denied the chance to partake in something that can be larger than themselves.

Anyway, I posted all of this because it’s at least worth discussing.

How would you set all this up?