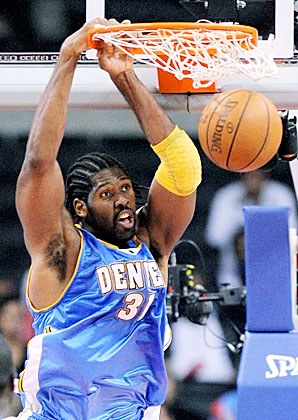 Perhaps the premiere free agent of this offseason Nene flew under the radar a bit while CP3 and Dwight Howard have dominated headlines. But the big Brazilian will stay with the Nuggs…

“The Denver Nuggets have re-signed center Nene to a five-year deal that, according to sources close to the talks, can be worth more than $67 million.

Widely regarded as the No. 1 free agent on the 2011 market, Nene was pursued vehemently by teams such as New Jersey, Houston and Indiana.

But all of his suitors knew that his preference was to stay with the Nuggets, with whom he’s played his whole career.

The deal, sources say, will pay Nene an average of $13.5 million over the next five seasons, which is one season longer than any other team could offer.”

This seems like a pretty fair price for a big man with Nene’s scoring ability. If Denver is able to resign Arron Afflalo, and put him next two Nene, Ty Lawson and Danilo Gallinari, they could very well compete for a Playoff spot in the Western Conference. Not bad considering the fact that they were forced to trade their superstar to the Knicks less than a year ago.