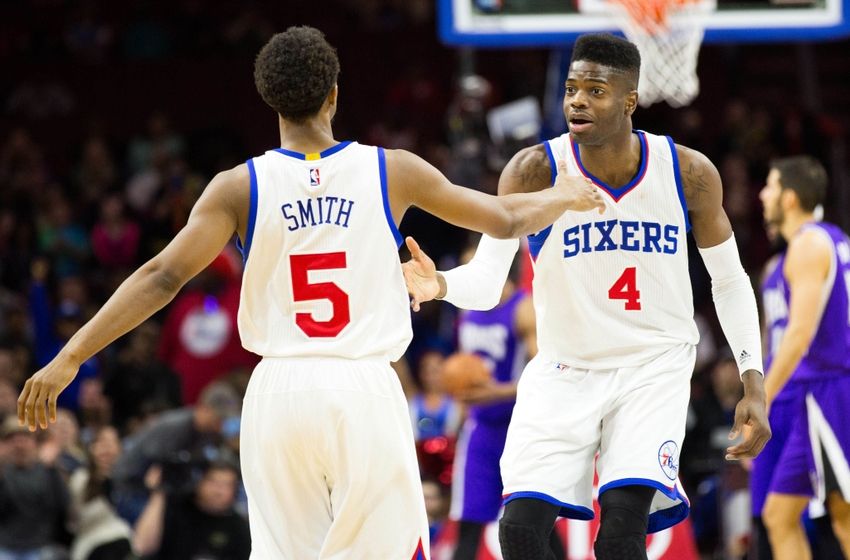 Noel has played with Smith for 20 games, and considers him the “first true point guard” he’s played with.

Per the Philly Daily News:

Since the trade deadline resulted in Michael Carter-Williams being sent to the Milwaukee Bucks and Smith was signed as a free agent, Noel’s numbers have been skyrocketing. […] In the 20 games since Smith’s arrival, Noel has averaged 11.1 shots a game, up from the 7.8 before that. He has scored in double figures in 15 of those games and has looked way more natural at the offensive end than at any other time. He is averaging 14.2 points since Smith came on board (8.4 before). In March, the numbers were 14.3 points, 11.2 rebounds, 2.4 steals and 2.1 blocks.

Once the media parsed his words and naturally made a big deal out of them, Noel was quick to assure everyone that his compliment of Ish Smith was by no means a shot at his old floor general, Michael Carter-Williams.

Noel and MCW came up together as AAU teammates in the Boston area.

“Nah, I’d never do that,” Noel said Wednesday about the former 76ers point guard. “He’s a playmaker. There are times when you need a scoring point guard that’s going to get in the lane, create and make scoring opportunities. […] That’s just the way the NBA is when you are that big [6-foot-6]. It’s good that you utilize your length and your ability to get the basket. I would never take a shot at him.”

“Everybody is different,” Noel said. “I think point guards in this league nowadays bring so much to the table where you are a playmaker or pass-first. I think Ish is a pass-first different type of point guard.”