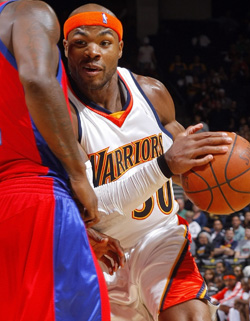 A fans were getting all ‘crabby’ last season, complaining that the referees were too lax on travel calls. Clearly, some clarification of the rules on traveling was in order.

According to ESPN, the unofficial is finally official: “The NBA has put into writing a rule allowing players on the move to gather the ball, after driving or catching it, and then take two steps.”

The lingo gets confusing, so just know this — The League isn’t changing its traveling rules, it’s merely updating an outdated rulebook. Players are allowed to take two steps once they pick-up their dribble — something that referees have been allowing for decades.

Is this a cause for worry? No. Remember, this is just a clarification of the rules. Players are brought up learning to take two (and a half) steps on the way to the cup. The pro hop wouldn’t be allowed in the pros if two steps wasn’t allowed. LeBron’s crab dribble is still illegal.

If you think players will be running to the basket like a running back, think again. It’s unofficial has just become official — two steps without a dribble, no more.