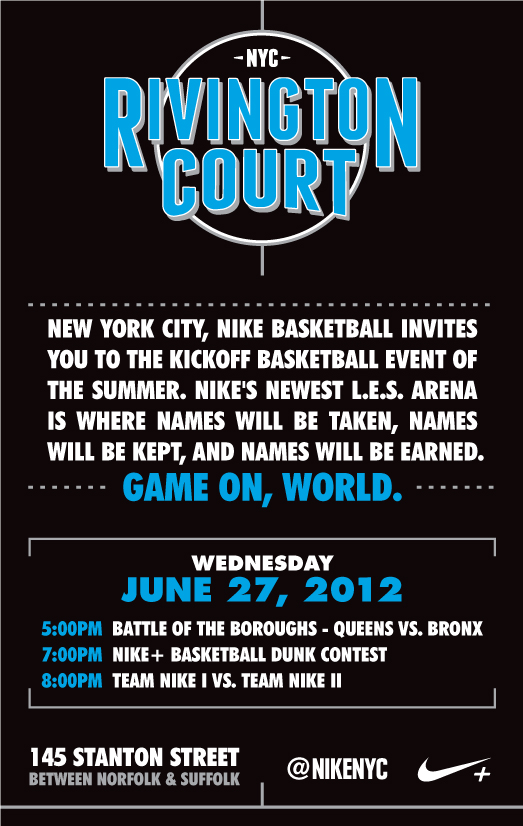 After one of the most memorable summers in the history of New York City hoops, Nike Basketball is back with tournaments all summer long, showcasing, and pitting against, the top talent from the tri-state area and beyond. Nike’s newest grassroots hotbed is Rivington Court, which is located in NYC’s Lower East Side and is scheduled to open up later this week. Various events will be held there, including Team NIKE games and the 3rd edition of the Battle of The Boroughs tournament. Here’s some more info, courtesy of our friends at Nike:

Summer 2011 will go down as one of the greatest summers in the history of NYC hoops, period. Who can forget the Kevin Durant tour? In just one week, KD dropped 66 at

Rucker Park, 41 at Pro City, and 35 at Dyckman! Exciting as those moments were, the summer hoops spotlight shined brightest on Team NIKE, the reigning Dyckman and T.O.C. Champions. Through the creation of Team NIKE, tournament basketball was back in a big way. Countless numbers of NBA Superstars, Overseas Talents, and Playground Legends came from across the country and around the world to prove themselves on the playgrounds of NYC.

Then Winter approached and the elite ball players needed a place to sharpen their game. The temperature dropped but hunger rose. Masaryk was built and players grinded through the winter in preparation to dominate this summer.

While Coach Bingo and Team NIKE I will be accepting all WBF challengers in London, Paris, and Washington D.C. – Coach Rah and Team NIKE II will be battling for bragging rights all summer long against New York City’s best. Got something to prove against Team NIKE II? Settle it on their home turf – Rivington Court.

Then the future of New York, our high school kids, will be competing against each other all summer long in the 3rd edition of Battle of The Boroughs. Each borough will use Rivington Court for practices and scrimmages and then will come together for a one-day, winner take all tournament in August.