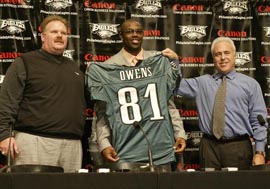 So I’m at the gym this morning watching CNN and getting my muscle game up and I hear it. Terrell Owens just tried to kill himself. Really? Damn. Even after the Hollywood divorce that he and the Eagles had I wasn’t blaming him for the debacle that became of last season. It was a team effort F-up, they were all culpable. I accepted the fact that it was done and when they traded him to Dallas I was like alright. Whatever, at least it’s over now and we can focus on the next season. He kept saying stuff well into the summer and I was like just let it breath man, nobody cared anymore. It finally ended it the start of training camp and everyone focused on whether he would bring down the Cowboys. All the talk lately has been about his injury and whether or not he would be able to play the Eagles in the so named “Revenge Bowl” in two weeks. But all of a sudden that doesn’t matter at all.

Now the thing is T.O has always been a little crazy but we accept because he’s talented. He’s also always been overly emotional, the type of guy to blow things outta proportion a regular. Taking things too personal and letting the drama get the best of him. It made for great theater but it was always a little unsettling. In his book he spoke about growing up in with his mother and grandmother and always feeling like he wasn’t good enough for anything or anyone. He was dark-skinned, poor and country and he came off as someone who maybe had a little bit of self-hatred. To counteract that he played hard and developed his skills to a level where people had to love him. Additionally, it’s no secret that this guy is a workout fiend and has tried to chase perfection in that way as well.

Still he always had that aura around him of being alone in the world. And maybe it got the best of him. When you’re at your weakest is when you need to people who care about you the most to be by your side. He probably needed to see someone, a therapist or counselor or somebody. But that is hard for us. Black people in general don’t really go to get their mental health checked out. And Black men don’t deal well with overt signs of weakness at all. And it’s been conditioned in our communities for generation that to go see someone for your mental well-being was a negative. Its one thing for people to think you’re crazy and another to go see someone and have it confirmed. Weakness for Black men is the closest thing to death. That’s why the “cool pose” has such value for us. We have to be strong for all the years that we were powerless to protect our homes, our families and our lives. So we overdo it and if something is wrong we just ignore it or drown it out with drugs and liquor. Meanwhile the problems never get solved and every once in a while the pain erupts. And if you can’t control it, if you can’t overstand what’s happening to you or if you don’t anyone on your side you will sabotage yourself. Or in T.O.’s case try to take his own life. He needs immediate help and probably should take a few weeks if not the rest of the season off. The Cowboys need to show that it isn’t all about winning and a profit margin and except the fact that this season is possibly lost. Make sure your peoples are okay, that’s the only civilized thing to do here. This is sad but it could have been worse if he would have succeeded. Hopefully it will work out for him. This is bigger than football, this is real life.