The kid in the ad on the link to the column is me at 4+ years old. The 1987 Mets had just missed repeating as NL Eastern Division Champions, finishing second to the St. Louis Cardinals. The lyric quoted in the ad (“I don’t care if I never get back.”) makes sense given what had just transpired and the product being marketed. My dad, one of the minds behind the ad that ran in baseball publications, explains the details.

“It’s very simple and dream like…you’re sitting there in the stadium seat, clutching a box of Cracker Jack with your eyes closed…dreaming. A little boy in his own heaven. There are no other people in the shot. It has a fuzzy halo like quality emphasizing the fantasy…The box obscures any Met logo across your chest. You can’t put a team logo in an ad without it being a promo for the team. It’s a legal issue.”

Around that same time my mom came back from the library with the 1986 New York Mets season recap video, A Year to Remember. I was so addicted that I had her tape me my own copy using the library original. With apologies to the young woman that rescued me when I stepped on a bees nest and suffered double digit stings, A Year to Remember was my favorite babysitter growing up. And I still watch it. It’s how I most enjoy killing time twice a year.

Really, what was not to love? The starting rotation cut through wood like it was Al from Home Improvement. (“Now, be careful there, Tim; that Sid Fernandez rising fastball is the sharpest new woodcutter on the market, second only in to the 85 Gooden model that we no longer have in stock.”) The stellar fielding by Keith Hernandez, Wally Backman, Mookie Wilson and Lenny Dykstra makes the web gems of today looking like Cubic Zirconias. The catchy music headlined by Glen Frey’s “You Belong to the City” makes you feel like somebody put in you in a 1980’s, VH-1 sponsored time machine. Roger McDowell and Howard Johnson (pre-juice) explain how to light a teammate’s foot on fire using matchbooks, gum and cigarettes. They called it a hot foot and wreaked havoc on their teammates all season long. (Sidenote: Feet are gross and I think practical use of the hot foot could eliminate the disgusting foot fetish entirely.)

When they weren’t kicking the fire out of their cleats, those Mets were kicking ass in more ways than one. During one of the 86 Mets’ many bench clearing brawls, third baseman Ray Knight hit Cincinnati Reds outfielder Eric Davis so hard that Mike Tyson went out of his way to meet him. While they won fights and games at an equally astounding rate, the 86 Mets rolled with a swagger so offensive that everybody outside of New York hated them.

This video represents the only championship that I know, an experience filled with so much vicarious living through the past that I don’t honestly know what would happen to me if I experienced a championship live. I might spontaneously combust. 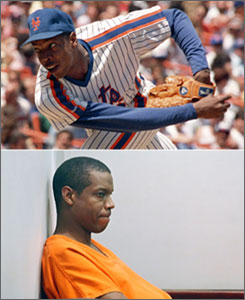 The problems that followed the Mets during my coming of age as a baseball fan don’t need to be exhaustively chronicled. A short recap: firecrackers were thrown at reporters, bleach was sprayed at reporters, reporters wrote a book called The Worst Team Money Could Buy, and Bobby Bonilla threatened a reporter by saying, “I’ll show you the Bronx,” which was insulting to both the reporter and the Bronx.

And what was I supposed to take from the fact that my favorite athlete of all time was blowing lines of coke while I imitated his windup? I’m not sure. Initially, I was too young to realize what was going on. When the 86 Mets celebrated their silver anniversary this summer, I couldn’t go out to Shea because Dwight Gooden was sitting in a jail cell. It just didn’t seem right.

(Full disclosure: If you never took Poli Sci 101, this may not make any sense. Sorry.)

It used to be that the Mets were second class citizens to the Yankees. In essence, the Mets were the proletariat and the Yankees were the bourgeoisie. (Ironically, the New York baseball proletariat has had more money to play with than most other teams in the league. My point is more rooted in class status and results than economics.)

It’s supposed to be that the proletariat (working class) will eventually rise up and overtake the bourgeoisie (elite ruling class) in the process becoming the new bourgeoisie. As it pertains to baseball, this would seem rational, except Karl Marx, author of the most relevant communist doctrine in history, never had to take into account George Steinbrenner’s deep pockets and ruthless, win-at-all-costs nature. Given the second class status and the young talent already in place, Omar Minaya did the only thing he could: He reached deep into the organization’s pockets and financed the Latin version of the bourgeoisie: La Burguesia. In came Pedro. In came Carlos Beltran. In came Carlos Delgado.

In early July, spurred on by veteran pitching and a lineup so potent it could impregnate an 80 year old woman, La Burguesia was well on its way to reclaiming their place as New York’s top dog. While Jose Reyes, Captain Redass (the tabloid sensation, Paul Lo Duca), David Wright, Beltran and Delgado mashed away at an inferior national league, the Yankees were trying to replace their own injured stars with retreads like Andy Phillips, Nick Green and Kevin Reese. Yankee fans were adopting the spoiled, vomit-inducing “woe is me, I may never see October again” attitude. Mike Francesa may have even taken a giant sound byte out of his microphone in disgust—yes, Mikey, EAT YOUR HEART OUT…literally—while Steve Somers probably giggled with glee.

It finally appeared that Met fans would finally stop feeling the obsessive-compulsive need to chant “Yankees suck!” at the end of every home game just to feel better about themselves. It wasn’t to be, however, as the Yanks restocked by acquiring Bobby Abreu (one of baseball’s hardest outs) and Cory Lidle (a good live arm for the starting rotation). Since the trade, the Yankees have become the Yankees again, rightfully reclaiming the AL East from the Red Sox and taking La Burguesia off the back page as they plodded along the course of inevitability for three long, boring months.

This should have been the most enjoyable season of my life. But it hasn’t been. Maybe it was the unfamiliarity with a four month long double digit lead that has rendered me nonchalant beyond belief. Maybe it’s the fact that I’ve seen more Mets hats in NYC this summer than I have in the previous 4 combined—I can’t understand the pleasure in jumping on a bandwagon after a division title has all but been guaranteed. Maybe it’s my consistent worrying that the Mets won’t live up to expectations in October. Maybe it’s that I was due for a letdown after going to 10 Met games last summer and leading them to a 9-1 record with my awesome karma.

All that noted, I think the biggest factor is that this year has been the exact opposite of my lifetime’s experience as a New York Metropolitan fan: The pessimism when things are going well, the optimism when things are going terribly, the utterly useless preoccupation with how many games we’ll need to win to overtake the wild card lead in July; basically, the things that keep me on my toes and expand my intense woulda-coulda-shoulda way of life have gone missing this season.

THE HERE AND NOW

The Mets begin the NLDS today against the Los Angelas Dodgers. They look to survive the loss of their ace aces and spiritual leader leaders. Their pitching staff appears to be in shambles. Yes, it’s that deep, folks. I hope they thrive amidst the adversity and go all the way.

Because I need new memories.