Pat Riley on LeBron James Leaving: ‘It Has Fired Me Up’ 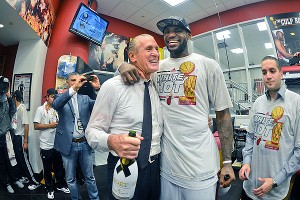 The Miami Heat continue with their PR campaign following LeBron James’ departure back to Cleveland this summer.

The team president admits that the LBJ free agency news was a “tough blow”, but as always, Riley remains optimistic (and defiant) about the Heat’s future.

“It has fired me up,” the Heat’s president said in a conference call Wednesday with several reporters, indicating he fully expects to remain with the team in the summer of 2016, when Miami could have nearly $50 million to pursue free agents if the salary cap rises as high as some project.

“I don’t like to get beat at anything,” Riley said. “I want this team to be as competitive as it has ever been. I want our fans to know they will see a great team every night. Every now and then you have a chance to build a generational team, where you know that team can be together 10 to 12 years. … That has been broken. We’re going to try to make it another generational team. That’s what my objective is.”

“We are going to build another championship team, and that’s it. After 45 years of being in this league, I’ve been around 15 transcendent players that walked out the door … and you move on. Sometimes things happen to you that you don’t like, but you’ve got to move on.”